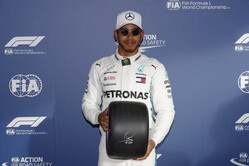 Already feeling despondent following the grid penalty that will see him start tomorrow's Grand Prix from the fourth row, Daniel Ricciardo's hopes of a home win took a further knock when he saw Lewis Hamilton take pole with a scintillating lap in the final moments of today's session.

Going quickest in all three sectors, the Briton finally stopped the clock at 1:21.164, the fastest lap ever recorded at the Albert Park circuit.

"That sucks," said the Australian, for once the almost ever-present infectious grin missing from his face.

"It's frustrating," he continued, "because I think everyone else wants to see them get challenged a bit more, so that was a little bit of a punch in the stomach to everyone.

"I knew they had a bit more," he sighed, "and I expected them to be more than two-tenths quicker than us... but I didn't expect that much. That was like throwing a pie in everyone's face."

Meanwhile, at the post-qualifying press conference, doing his best to hide his shock at being 0.67s off Hamilton's pace, Sebastian Vettel did his level best to put on a brave face. However, when talk turned to a so-called 'party mode', a new mode on the Mercedes engine which aided the Briton in his quest for pole, Hamilton was quick to deny it.

"Then what were you doing before?" enquired Vettel.

"What were you doing before?" asked the German again.

"I was waiting to put a good lap in," said Hamilton, cruelly adding, "to wipe the smile off your face!"

However, while the world champion was denying the existence of such a mode, team boss Toto Wolff had already let the cat out of the bag.

"There is a party mode in the car," the Austrian told reporters, "we switched the party mode on in Q3.

"There was no difference from the first run in Q3 to the second run in Q3," he added, "he just said that he had a great lap, pulled it all together, carried more speed through the apexes.

"The gap was down to Lewis putting in a lap with the grip level that he didn't seem to be able to extract before," he insisted. "Everything was in the sweet spot, I guess. There wasn't any difference in modes."

And while Sebastian felt the smile slip from his face and Daniel wiped the pie from his, the thought of Lewis already heading to his fifth title will have left Chase and his pals feeling in little mood to party.