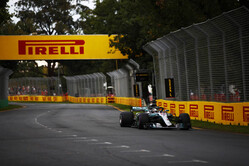 A mixed day of conditions is likely to be replicated tomorrow, adding further unpredictability to a grand prix where the all-time track record was broken in qualifying, courtesy of polesitter Lewis Hamilton for Mercedes. Hamilton also became the inaugural winner of the Pirelli Pole Position Award, which will be given to the polesitter at each race this year.

Hamilton broke his own record from last year using the ultrasoft tyres, which was the only compound used by every team in qualifying, apart from Red Bull. Both Red Bull drivers chose to use the supersoft in Q2 and will be the only team in the top 10 to start on this compound tomorrow. The final Q3 session was interrupted by an accident and resumed for a 10-minute sprint for pole after a brief red flag delay.

The wet FP3 session also showcased the wet and intermediate tyres, but by the time qualifying arrived ambient temperatures had risen to 25 degrees centigrade, with 29 degrees on track.

Mario Isola: "Rain earlier on in the day washed the track clean of rubber and also allowed the teams to look at crossover points from full wet to slick. More rain is expected overnight, adding another interesting variable to the first race of the season. Each of the compounds we brought to Melbourne have been used so far, meaning that teams have a wide range of data, but not necessarily targeted towards a specific scenario.

"So, there will inevitably be some element of strategy improvisation tomorrow, depending on the race circumstances. We've already seen some alternative thinking on tactics from Red Bull, which has chosen to start the race on the supersoft: it's going to be interesting to see how this will play out."