F1 to get a new theme tune 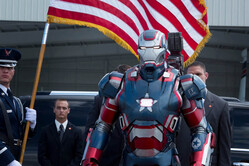 In its first year of ownership of Formula One, despite its continued lauding of the passion and tradition of the sport, Liberty Media has appeared hell bent on doing away with the old and bringing in the new… at a price.

Ignoring the farce that was Michael Buffer ahead of the United States Grand Prix, there was the introduction of a new logo - even though it bore more than a passing resemblance to the logo adorning a brand of support tights.

Now, along with the decision to start races ten minutes later and moving all sessions in Europe and Brazil so that they start an hour later than usual, Liberty is to give F1 a new theme tune.

Brian Tyler who composed the scores for Iron Man 3, Avengers: Age of Ultro and five instalments of The Fast and the Furious franchise, has now been commissioned to write a new theme tune for F1.

"What an honour to be chosen to compose the Formula 1 theme!" tweeted Tyler, who also composed the NFL theme for ESPN, where, of course, F1 commercial boss Sean Bratches was Executive Vice President of Sales & Marketing. "This is a life-long dream come true as I am a massive #formula1 fan. Thank you F1!"

As of last November, his films have grossed $12 billion worldwide which puts him in the top ten highest-grossing film composers of all time, having scored three of the top ten films of all time in terms of global box office receipts.

With such a track record it is doubtful that Mr Tyler's services will come cheap, which is unlikely to go down well with the teams who are already facing a drop in prize money as the sport's new management's profligacy continues.

At a time the prize money for 2017 has already dropped by Ł35m ($47m), the result of the establishment of new London offices and an ever increasing headcount, the infamous logo, the London event and Ross Brawn's in-house F1 team, the teams are already unhappy with Liberty's spending habits.

Indeed, the teams argue that it is Liberty that should be funding these projects and not them.

While Tyler also scored Bill Paxton's Frailty - a personal favourite of our editor - other than the question of money, one has to point out that F1 is not Formula E. It is not starting from scratch so why does Liberty feel it immediately has to create new traditions for the sport when in fact it has 68 years of them.

Ironically, Liberty is spending the teams' money when it was the teams who created those traditions in the first place.

The news comes at the end of an opening test which suggests Mercedes and Lewis Hamilton will once again be the benchmark - and probably champions - and whether a new theme tune, as opposed to a season long fight for the title or even more overtaking throughout the field, will appease the fans remains to be seen.

As for using the services of a man who is best known for his work on Superhero movies – can't you already hear those crashing drums – why couldn't Liberty have called on Dennis Waterman who would have composed the tune… and sung it!