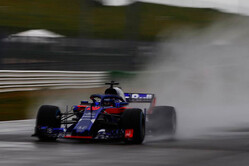 As the team carried out a filming day at a soggy Misano, Toro Rosso teased its fans with a number of shots of empty track and pitlane, insisting that its photographer simply wasn't quick enough to get a shot of the Faenza outfit's much-anticipated 2018 contender.

However, approaching the end of the day, the Italian team finally tweeted a picture of the car heading through the spray, Brendon Hartley at the wheel.

"Trouble-free day! No joke," tweeted Pierre Gasly, continuing the trend set by the team last week when it gently mocked those expecting new engine partner Honda to fall at the first hurdle.

"The new girl ran super-smooth," tweeted Hartley, who admitted to having a "great" day even though it was "very wet".

Though the picture gives little away, what was noticeable is the aerodynamic trim on the Halo.

The car, designated the STR13 and which will be powered by Honda following the Faenza outfit's defection from Renault, will be officially unveiled on Monday, just before the initial pre-season test gets underway.

Having been overhauled by Renault in the 2017 standings at the very last race, Toro Rosso is seeking a significant step forward this season, while sister team, which may well be forced to switch to Honda also next season, will be watching the Faenza outfit's progress - or lack of it - with interest.