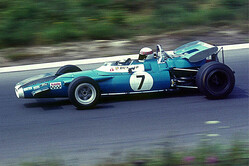 Talking to Dutch TV broadcaster Ziggo Sport, Max Verstappen has admitted that he has little interest in the history of the sport, revealing that historic F1 cars do little for him.

"I do know a bit about it, but my knowledge doesn't stretch that far back," he tells sports journalist Wilfried de Jong.

"I know the names, but the really old cars don't really have my interest," he continued. "I'd never really have the urge to drive those cars; they're just too old, too slow. Although anything driven on the limit is challenging, it just doesn't do it for me.

Fact is, if Max sat at the wheel of one of those glorious machines from the 60s, for example, and drove it on the limit devoid of the myriad of aids and devices he takes for granted on his current machine and which give grip his predecessors could only fantasise about, he would find a new respect not only for the cars but the men that drove them.

Perhaps he and some his colleagues might take advantage of the fact that the Masters Historic Formula One series is part of the support programme for the British Grand Prix in July.