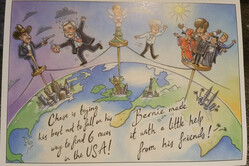 It might be the season of goodwill to all men... but not as far as Bernie Ecclestone is concerned.

While Christmas is meant to be the season of goodwill to all men, that clearly doesn't apply to Chase Carey and his FOM pals, not according to Bernie Ecclestone's much anticipated Christmas card.

The 2017 card from Formula One's chairman emeritus, a role the former supremo admits has "elevated me in a very honourable position, and it’s so high in the company I can’t look to see what’s going on…" takes a well-aimed swipe at Chase Carey the man now running the sport.

While Ecclestone has made no secret of the fact that thus far all he has seen from the sport's new management is talk, he takes it one step further with his card.

Viewed from on high, Carey can be seen walking unsteadily on a tightrope, his position precarious, a coffee in one hand and an unfriendly 'local', gun in hand, waiting to greet him at the end, while dark rain clouds make the American's journey even more treacherous.

"Chase is trying his best not to fall on his way to find 6 races in the USA!" reads the card.

Meanwhile, under the gaze of Jean Todt, who sports a near beatific smile, Bernie is seen striding along his tightrope towards a group of world leaders all keen to welcome him.

"Bernie made it with a little help from his friends! Declares the card.

The greeting only adds to the festering spirit.

"Another year has gone," it reads, "and with the happy Christmas with us, you now have time to think about what you should not have done this year, and what you are going to do next year."

At a time Ferrari is already talking about a breakaway series, and Mercedes has also expressed unease at Liberty's proposals for the 2021 engine rules, not to mention the row over money that will really see the excrement hit the ventilation device, Bernie is clearly taking the opportunity to give all concerned something to think about over the break.

Of course, the more sceptical among you might wonder whether the card has even more meaning in terms of the hostility Chase Carey is facing and the various people in positions of power that Bernie can call on... the Briton having rejected an FOM jacket at Sochi this year in favour of one worn by the senior Russian officials.