A restructure at Honda 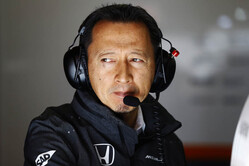 Preparing for the start of a new partnership with Toro Rosso, Honda has revealed changes to its F1 project team structure.

Under the new structure, an Operating Officer in charge of HRD Sakura will oversee research and development and the overall operation of races and testing.

In the meantime, Honda created a new position, F1 Technical Director, who will concentrate on directing the team at the spot of racing and testing.

"In the past, the Head of F1 Project assumed responsibility in both technological development and directing the team at the spot of racing," said Katsuhide Moriyama, Chief Officer for Brand and Communication Operations, Honda Motor Co., Ltd. "By separating these areas of responsibility, we will evolve our structure so that both the development team and racing/testing team can assume their respective responsibilities more speedily.

"By ensuring both the development team and racing team soundly fulfil their respective roles, Honda will continue its challenges so that fans can enjoy seeing Toro Rosso-Honda competing at the top level without further delay. Thank you for your continuous support."

Tanabe, who joined Honda in 1984, subsequently engineered for Gerhard Berger at McLaren and subsequently, following a stint in the Honda IndyCar engine division, was chief engineer for Jenson Button at BAR and then Honda.