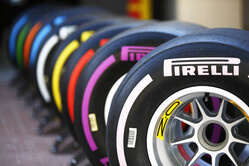 Despite making clear that it is capable of creating tyres that would last for an entire race, Pirelli continues to be the frontline in terms of manufacturing 'the show'.

While this year's wider tyres saw the expected increase in speeds, despite the media hyperbole in terms of new lap records, in fact only ten races saw the existing lap records broken.

Furthermore, as witnessed last Sunday afternoon - certainly by those of you who managed to remain awake - one-stoppers pretty much remain the norm, with a majority of the races witnessing only one pit stop by the leaders.

In an attempt to introduce more degradation, and thereby increase the need for further tyres stops, in turn hopefully adding to the drama created by pit stops and the associated strategies, Pirelli has gone a lot softer... to the point of introducing a new hypersoft compound.

"Considering all the range is one step softer, plus we have the hypersoft, we now have the option to go soft enough to target two stops," said the Italian manufacturer's F1 boss, Mario Isola, according to Motorsport.com. "I believe that three stops is a bit too much because we know it can be a bit confusing to have too many stops. We will try to make the selection of having two stops or one of the fastest strategies a two-stop.

"There is another advantage," he continued, "with more compounds and a softer step, you give the teams the possibility to design the car that is more gentle on the tyres, so you can push the tyre towards the softer side. This is an additional variable that is up to the teams, and we give to everybody the same opportunity."

"We are allowed to jump one step, so we are not obliged to go with the soft, supersoft and ultrasoft for example," confirmed Isola. "We will tune the compounds' choice and selection to make sure we can generate different strategies. The average number of pit stops should be two. This is the target. We want alternative strategies."

After his experience of the hypersofts, Lewis Hamilton described the pink-banded tyres as "the best tyre that Pirelli have produced since returning to F1", though in all honesty that is a comment open to interpretation.