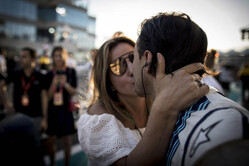 Felipe Massa finished 10th and Lance Stroll 18th in the Abu Dhabi Grand Prix. Both cars started on the ultrasoft Pirelli tyre, with Felipe starting in 10th and Lance 15th. Lance fought his way up to 13th at the start but struggled with balance issues and pitted on lap 11 for the supersoft tyre before pitting again on lap 29 for the ultrasoft. Felipe ran as high as seventh before making his sole pitstop of the race on lap 22 for the supersoft tyre. Lance made his third and final pitstop on lap 35 for a fresh set of ultrasoft tyres. Felipe ends the season 11th in the Drivers' Championship, ahead of Lance in 12th. The team secured fifth in the Constructors' Championship with 83 points.

Paddy Lowe, Chief Technical Officer: We were determined to finish the season on a high. There was a lot of emotion in the camp around Felipe's last drive for the team after such a great career in Formula One. It was a tough race with some very competitive racing. We had a close fight with Fernando (Alonso) in the opening lap and then later on in the race around the pitstops. Unfortunately, we didn't have the pace today to stay ahead. We ran out of energy on the outlap, which is why Fernando was able to get past as they came out of the pits, but we scored a point and points is what it's all about. I'm happy for Felipe and for the team to finish that way. It was a much tougher afternoon for Lance. He didn't have the pace today. He had a good start and got up to 13th with some good opening laps but finally lost position to Grosjean after a very close fight. He then had a big lock up, so we boxed early for the first tyre change. From there the race really went backwards due to additional pitstops and two more lock-ups whilst fighting for position, so not a weekend to remember. Finally, well done to the team on securing fifth in the Constructors' Championship.

Felipe Massa: It's a great feeling. I can say I am really proud of everything I've achieved, all 16 years and all the amazing races, and the great people I met in the paddock, racing against the best drivers in the world. To be honest, I'm very lucky to have had all of this in my life so thanks to my family and to god for all of these amazing opportunities. The race was good, I was fighting from the beginning to the end. Unfortunately, we lost the position after the pitstop but I'm really happy overall.

Lance Stroll: First of all, I want to say a big thank you to the team for everything this year, because the highlights have been incredible, especially in Baku and Monza. We have had great races, finished in the points seven times, so it is a big thank you to them for all their hard work and I have been proud to be a part of this team. However, it was not a good race today. I hate to be negative, but nothing worked this weekend so I just couldn't get the tyres switched on and I was just lost out there. We weren't in the race today. We had three pitstops and still it didn't work. The last two weekends were ones to forget and before that, we were doing just fine. We need to understand what exactly went wrong. I know it was tyre related, but we are missing a huge chunk of lap time and it is coming from somewhere because before that I was confident in the car. Now I shall have some time off, but then get back to work and work harder than ever and come into 2018 as strong as I can possibly be and be on top of my game as much as possible.