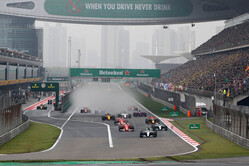 It's no secret that, much like those record labels that turned down The Beatles for being long-haired and noisy, deep down Bernie Ecclestone must regret that he never really got to grips with the digital age.

Despite being at the forefront of TV coverage of the sport, presiding over F1 at a time when other sports followed its lead, Ecclestone never got to grips with the digital age believing it to be a gimmick, a passing phase.

Though he finally saw the light, it was too little too late.

Not so, Liberty Media, which intends to make the sport's digital presence the cornerstone of its plans to not only win over new followers but to show those already on board what they've been missing.

"Quite frankly, I think F1 is almost a start-up," he told the audience, "because there has been so little done on the digital and social media front, and the way the content of F1 was presented, so for us it really had been a fresh start.

"That is good and bad," he admitted. "It is good because we have an opportunity to create what we need going forward for the future, bad because there was nothing there to build on.

"But there are some really exciting things that people are going to start seeing next year, in this arena, of how information is presented.

"F1 is so content-rich, there is so much data, so much information, that we can layer it at whatever level the fan or the enthusiast wants to engage, and what we want is for the casual fan: to start to understand how rich is the content of F1 going into it. We are looking at how we communicate with the fans within a race so that we can again provide all those extra layers of information. There are some new initiatives that will come out next year.

"We need to introduce a system for the fans. It is a big task, it is a fairly massive task and we are just looking at how we best introduce it."

Other than the fact that this will cost money, the big concern for F1 fans - much like McLaren Red Bull and Toro Rosso - is reliability.

Thus far, F1's main entry on the digital stage has been the F1 Timing App, and regular readers will be aware of the numerous issues this app has had since its introduction.

Despite the high price it remains unreliable, and while there are some weekends when it works faultlessly there are far too many when it doesn't.

Many fans want as much information as the sport is willing to provide them with, however, it has to be accurate and trustworthy.

Furthermore, if they are to fork out Mercedes prices, they want Mercedes bullet-proof reliability, not Honda.