Wolff suggests Ferrari may have reached its limit 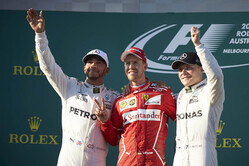 In the wake of the technical failures that have effectively killed off Sebastian Vettel's and Ferrari's 2017 title hopes, Mercedes boss Toto Wolff suggests the team may be paying the price for its massive step forward this year.

Indeed, having looked strong in pre-season testing, though never entirely showing its hand, Ferrari took victory in the season opener in Melbourne and again in Bahrain a few weeks later. And while Mercedes remains the class of the field, there is no doubt that as recently as Singapore the Italian team has given its German rivals a run for their money.

However, the last two races have seen the Maranello outfit suffer issues related to quality control, an area that teams strive to be fully on top of aware that championships have been lost in the past due to a faulty washer or bearing.

Admitting that his team has benefited from these mistakes, Wolff believes Ferrari is now paying the price of its remarkable rate of progress this year.

“In this sport you take no prisoners," he said, according to the Daily Telegraph. "It is about having the fastest car, the best driver and the most solid performance.

"We've been there," he continued. "We've had difficult moments for each of the drivers in the past in terms of reliability.

"When you're pushing the boundaries you will eventually reach your limits. Ferrari's development from 2016 to 2017 was exceptional and probably this is a 'development' phase."

“I can relate to how it feels," he admits, "that feeling of having had three races where you've lost a lot of points. It doesn't feel nice.

"We've benefited from Ferraris' misfortune and reliability woes in the last three races. But that doesn't mean that we're patting ourselves on the back. On the contrary, I think we need to continue to push."