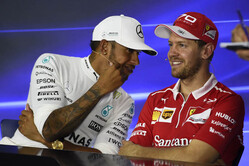 Title hopefuls Lewis Hamilton and Sebastian Vettel will be looking to the weather gods ahead of Sunday's Japanese Grand Prix.

However, it won't be so much in terms of rain, which would bring Red Bull, and possibly others, into the equation, but the temperature.

Ahead of a race which could put his (fifth) title hopes further out of reach, Vettel will be hoping to see the mercury rising, while Hamilton will be hoping it remains cool.

"I think there should be sunshine which makes everything a bit hotter, so let's see how that goes," said Vettel who heads into tomorrow's race 34 points adrift of Hamilton after difficult weekends in Singapore and Malaysia.

"For us, I think normally we are a bit stronger in the race compared to qualifying, so that's where I guess we get together and see what we can do, at the start and then during the race."

Looking to Mercedes, which continues to play down its chances, despite its form - certainly as far as Hamilton is concerned - painting quite a different picture, Vettel admits the German team has surprised him this weekend.

"Obviously, you always know what you are doing but they have been a bit up and down," he said. "Last week they weren't very quick, this weekend they seem to be back to normal."

At Mercedes, where the team has been suffering continued issues in finding the exact window in terms of getting the best out of its tyres, not to mention issues with its latest aero update, Hamilton admits he would prefer it to remain cool.

"The car is a lot different this weekend and a lot more enjoyable to drive," he told reporters. "Last weekend was a bit of a disaster but we still got pole, which was unusual."

Asked if the team is any closer to understanding the obvious improvement since last week, he said: "I think we have an idea. I think there's a lot of analysis that's gone in to understanding it, so I think we do understand. It's not something we can particularly rapidly change, but we're in a cooler climate here, so that's definitely one thing that adds to it."

"The bad days makes you progress more, and there was some learning, and we changed the car for Suzuka," added Toto Wolff. "We put it on the track and it was pretty solid, straight from the get go.

"We learned a lot in Malaysia," he added, "we looked at the data, analysed it, we found ways where we thought we could optimise the car's set-up and it proved to be the right direction.

"Nevertheless it doesn't solve the underlying issue that there are big swings, not only for us but also for other teams," he admitted. "Others who were competitive in Malaysia were a second off today.

"We have become a little bit rain dancers, or wishing for cold weather," he admitted. "The heat is something that made us struggle in Singapore and Malaysia, so it plays a role in our thinking and it is certainly not optimal for our car if it were very hot."

Meanwhile, temperature appear to be rising already. When minded that Vettel might be aggressive at the start of tomorrow's race, Hamilton grinned and said: "He won't be any more aggressive than I am."