Magnussen: I won't back down 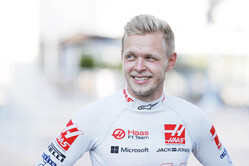 Just days after the rock legend's death, Kevin Magnussen echoed the late Tom Petty at Suzuka today when asked about the aggressive approach to his racing that is fast losing him friends on the F1 grid.

In the same way that you would be safe betting the deeds of your abode on Romain Grosjean complaining about his brakes, Sebastian Vettel criticising a back-marker and Fernando Alonso complaining at just about everything, so too a wager on at least one driver complaining about Kevin Magnussen during a race is a pretty safe bet.

Indeed, it would be easier to list the drivers he hasn't angered as opposed to those he has, the Dane causing even his most mild-mannered rivals to revert to fist shaking and expletives as he resolutely defends a position or attempts to win one back.

However, speaking ahead of this weekend's Japanese Grand Prix, Magnussen took a leaf out of Tom Petty's songbook, insisting that he won't back down.

"I know that I am pushing hard, and that's my intention," he continued. "If it's fine for the stewards, it's fine."

Indeed, while the stewards seem ok with his hard-nosed approach, so too does his team.

The Dane claims that part of the reason he finds himself in such scraps is because he will often pass faster drivers at the start of the race, and subsequently have to hold them off as they attempt to reclaim the lost positions.

"It's pretty simple," he said, "we're not in a position to just drive into the points, we need to fight, and we need to fight hard to stay in the points if we find ourselves there. I often find myself further up in the beginning of the race, because whenever everyone is together it's easier to make positions and fight your way up. Once everything settles your race pace is more important. Sometimes when you're in eighth position or whatever, and you're not fast enough, then you have to fight.

"There is a difference in the way you have to drive," he insists, "if you're fast or you're not fast. If you're trying to get points and you're not really fast enough to be in the top ten, then you really have to fight hard.

"If you're fighting for the World Championship, then perhaps you don't want to fight as hard, you want to be a bit more safe, and play the championship. In terms of our position in the championship, we need to go into every race to the maximum and try and get a point or two or six. You might get anything and you just need to go for it. It's very low chance that there's going to be consistent points scoring throughout the year.

"We all get a bit hot-headed in the car in that situation," he smiled. "Whenever something happens, I guess you guys know it as well what happens in traffic, whenever someone cuts in front of you or whatever, you swear, and you think after maybe it was OK, or whatever.

"It doesn't mean so much when it's in that moment in the car," he added. "After the race to say things, get further into it, I wouldn't do that."