Some good news for Vettel 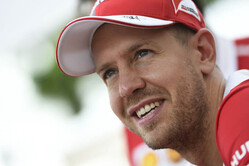 Various sources confirm that the gearbox previously thought damaged in the post-race clash with Lance Stroll on Sunday has been given the all clear.

Such was the impact and the damage caused to the Ferrari, there were fears that a new gearbox would be required this weekend in Japan, thus incurring a grid penalty.

However, the unit was flown back to Maranello to be checked and was subsequently given the all clear. It will now be flown to Suzuka where it will be installed in the German's car before Saturday practice.

In the wake of the first lap crash in Singapore and the need to start from the back of the Sepang grid after a cracked manifold meant he had no (turbo) power, a grid penalty in Japan would have effectively ended Vettel's title hopes once and for all.

Even so, with five races remaining, Vettel heads to Japan 34 points adrift of Lewis Hamilton.