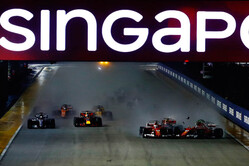 Though he kept it remarkably cool on the outside, Max Verstappen was under no illusions as to the cause of the crash that saw him fail to finish the opening lap of a race for the second time this year - though he effectively only completed one lap in Spain.

Asked in the aftermath of the accident which saw the Red Bull, both Ferraris and Fernando Alonso eliminated, who was to blame, the Dutch youngster was in no doubt. "Mainly Sebastian," he replied.

"He started squeezing me," he continued, "maybe he didn't see Kimi on the left, but that's not an excuse, if you're fighting for the world championship, you shouldn't take those risks to squeeze someone that much.

"What does he expect?" he exclaimed. "When you're fighting for a world championship, you shouldn't do that. It was not very clever, I don't think it was a racing incident. At the end of the day, they take, in total, three cars out.

"I tried to back out of it because I could see it coming," he said of the incident which saw him caught between the two Ferraris as they appeared to carry out a pincer movement, "but the rear tyres are wider than the front so I couldn't back out of it anymore. I was in the middle not doing anything wrong, I was just trying to have a clean start.

"I'm happy that not only I retired, but all three of us," he admitted, "so we all have a bit of pain. If I make a mistake myself and go off, that's a different story. I could see Kimi had a great start so I tried not to defend that as it's a long race but after 200 metres everything was done."