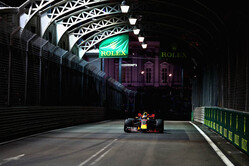 Red Bull impressed in this morning's session, with Daniel Ricciardo quickest and Max Verstappen third. Sandwiched in between was Sebastian Vettel while Lewis Hamilton was fourth.

However, due to the early timing of the session it was pretty much meaningless indeed, much of it took place in daylight.

Now the night has arrived and the conditions for this session are far more representative of what we might expect on Saturday and Sunday.

For once, the break that followed FP! Wasn't so much a lull as a mad frenzy, as a frenzy of press releases confirmed that McLaren will use Renault engines next year and Toro Rosso switches to Honda.

It's approaching 20:30 (local time) and the air temperature is 29 degrees C, while the track temperature is 31 degrees. Even though we have never encountered rain during a session here, there is a 10% chance of rain.

Magnussen and Sainz get proceedings underway, both drivers having sat out FP1 as their cars were given over to Giovinazzi and Gelael respectively.

Among the next out is Palmer, who is currently out of a seat for 2018.

Other than Vandoorne (ultras) and Wehrlein (softs), all are on the red-banded supersoft rubber.

No sooner has Bottas gone quickest with a 44.670 than Vandoorne posts 44.392 to take the top spot. Replay shows a big moment for Bottas in the final corner.

Another moments for Hamilton, this time at T14, as Ricciardo goes quickest with a 42.520. Moments later, Verstappen goes second with a 42.996.

Another improvement for Alonso, the Spaniard taking third with a 43.718. However, moments later he is demoted when Hamilton posts 43.640. The Briton is on the softs, while his rivals are mostly on the supers.

Going purple in all three sectors, Ricciardo crosses the line at 42.300.

Grosjean brushes the wall at T21 but appears to have got away with it.

Sainz heads off down the escape road at T18.

"Impressive pace from Hamilton on the soft," admits Pirelli. "Could this be a race tyre if there's an early safety car?"

On the ultras, Vandoorne improves to fifth with a 43.538 as Bottas also switches to the purple-banded tyre.

At which point, Pirelli says: "We're still to see the ultrasoft being widely used in FP2 so expect some stunning times."

Indeed, on his first lap on the ultras in this session, Hulkenberg goes third with a 42.448, the German quickest in the final sector.

"There's a hesitation on the throttle," warns Palmer, "when I'm trying to pick up the power."

On the ultras, Hamilton goes quickest in the last two sectors, crossing the line at 41.555.

Out come the yellows as Grosjean spins at T7, but nonetheless Ricciardo responds with a 41.228.

"I touched the wall," admits a sheepish Palmer, as the cameras show him brushing said wall.

A 41.408 sees Verstappen go second to his teammate, as Raikkonen improves to seventh (42.978). Vettel sticks with the softs.

Ricciardo clearly hasn't finished, going quickest in all three sectors he bangs in a 40.852.

Relay shows Alonso getting very out of shape as he heads on to the bridge.

Bottas improve to fourth (42.104) as Vettel finally switches to ultras.

As Vettel goes quickest in S1, Raikkonen can only manage two PBs. Vettel posts a PB in S2, but then aborts the lap after losing time behind Ericsson. The German expresses his displeasure.

Verstappen does well to escape Scot-free after he gets just a little too ambitious and merely glances the wall.

The VSC is deployed as a result of debris on the track. The debris being a large Rolex advertising hoarding which was dislodged when Vettel clouted it with the rear end of his car.

"I brushed the wall at the exit of ten," says the German. "Check the car." He subsequently pits and his crew gets to work.

A puff of dust as Stroll becomes the latest try his lucks with the barriers.

Given the all-clear following that Rolex moment, Vettel heads out on ultrasofts, the German yet to post a competitive time on this compound in this session.

Bottas is the latest to kiss the barriers, however, in a novel the move the Finn does it with his front tyre.

With 28 minutes remaining, we're now into long run territory as the drivers look ahead to the opening phase of Sunday's race.

Raikkonen almost trips up over an eager Perez in the pitlane. "Stop, stop, stop," the Mexican is told as he heads out and almost collects the Ferrari.

A big lock-up for Bottas that will not have done his front-left tyre much good.

Both Haas drivers are over 3.5s off the pace, down at the bottom of the timesheets with the Sauber.

That said, both Williams drivers are over 2.9s off.

"My front right tyre doesn't work at all," complains his teammate who is subsequently told to pit having added a litany of other issues.

"We're going to box this lap," Hulkenberg is told, "please cool the car on your way in, cool the car."

While Red Bull tops the timesheets, the longer runs appear to favour Mercedes.

A mixture of ultras and supers, though Hamilton has switched to softs.

As the session ends, Sainz makes a mistake and heads down the escape road at T18. However, he compounds his error by reversing on to the track causing a couple of drivers to momentarily find their hearts in their mouths.