We screwed up admits Marchionne 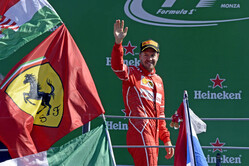 A poor performance in Saturday's qualifying session was followed by an equally lacklustre Italian Grand Prix, thereby allowing Lewis Hamilton to take the championship lead for the first time this season.

What should have been a huge celebration for the Italian team, which used the event to mark the 70th anniversary of its founding, was in many ways an embarrassment, with Mercedes scoring a 1-2 with such ease both drivers were able to turn their power down early in the race, Sebastian Vettel finishing 36 second behind and under pressure from Daniel Ricciardo in an underpowered Red Bull that started 16th.

Indeed, if Max Verstappen hadn't suffered an early tangle necessitating an extra pit stop, it could have been even worse for Ferrari.

"I think we just screwed up," Marchionne told Germany's RTL. "The set-up for the car was wrong. I think we underestimated the circuit.

"I think we screwed up from Belgium, from Spa, into here," he continued. "Now, we need to go back to the factory and find out which way the car went sideways. But we will be back in Singapore."

Vettel complained of an issue after going off on lap 40 that caused which meant he could no longer push, though curiously he posted his fastest race lap just two laps from the end.