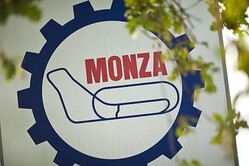 Once again, with an eye on the increased cornering speeds resulting from the 2017 regulation changes, a number of minor modifications have been made at the Autodromo Nazionale Monza.

New TecPro wall blocks have been installed in Turns 4, 8 and 11, while additional tyres, conveyor belts and tube inserts have been fitted to the existing tyre barriers in Turns 6, 7, 9 and 10.

TecPro barriers have been added to the tyre barriers in Turns 9 and 10 while the main pit straight has been resurfaced.

The detection point for the first DRS zone is 95m before Turn 7, with activation 210m after Turn 7.

The second detection point is 20m before Turn 11, with activation 115m after the finish line.

The tyre choices, medium, soft and supersoft are the same as in 2016 when Nico Rosberg won using a one-stop strategy, the German starting on the softs and subsequently changing to mediums, as did his teammate Lewis Hamilton who finished second.

The next eight drivers were on a two-stop strategy, none of whom used the medium rubber.