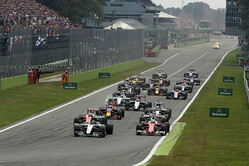 As we head to the 'Cathedral of Speed' that is Monza, in its latest technical insight, Mercedes explains the meaning of power sensitivity.

Monza is famously 'the' power circuit in Formula One, with its historic straights broken up by tight chicanes. It's reasonable, therefore, to expect the blast around Milan's royal park to be the most power sensitive track on the current calendar. In fact, Baku, Sochi and Montreal are all more power sensitive, with Monaco at the opposite end of the spectrum.

First of all, it's important to understand what is meant by power sensitivity. In simple terms, it's an indication of how much lap time improvement can be obtained through an increase in power. At Monza, power sensitivity works out at around 0.2s improvement for each additional 10 HP. For context, at a circuit like Monaco, the effect is smaller, roughly 0.12s per 10 HP. At Montreal and Baku - the most power sensitive tracks in F1 - power is worth 0.25s for each additional 10 HP.

Drivers spend 70% of lap time (79% of lap distance) at full throttle here, interrupted only by the two chicanes, the Lesmos, Variante Ascari and Parabolica. Monza's power sensitivity is tempered due to a short lap distance (5.793 km) and high average speed, which makes it the shortest race of the season. The 2016 Italian Grand Prix, for example, took just 1 hr 17 mins at an average speed of 237.56 km/h (147.61 mph).

Monza is one of the circuits where the impact of engine power can be most firmly felt, and any deficit in this area has direct repercussions on performance. Those with less grunt will often need to run their car lower on drag, producing less downforce through the corners but making them super slippery down the straights where positions are won and lost.

With DRS open and a strong tow, Lewis clocked 359.0 km/h (223 mph) through the speed trap at Monza during last year's race - the highest top speed recorded in the 2016 season. The 2017 generation of F1 cars are both wider and draggier than their predecessors, so it will be interesting to see how close they come to those top speeds. It's tricky to pinpoint a theoretical top speed. With stable engine regulations, slipstreaming - coupled with the effect of that extra drag - will ultimately be the deciding factor, rather than the power unit.

Outright top speed is the lifeblood of success at Monza. Without it, drivers become sitting ducks on the straights. But importance of a power unit's driveability can't be understated here. Turns 9 and 10 are expected to be flat in 2017, putting more emphasis on the low speed chicanes of Turns 1 / 2 and 4 / 5. Traction out of the Rettifilo chicane is key, as it's followed immediately by a long run around Curva Grande and into the next braking zone for Turn 4 - a key passing opportunity.

While it may no longer be the most power sensitive circuit on the calendar, Monza remains the ultimate test for an engine supplier. That high full throttle percentage - the highest of the year - puts the power unit under more stress than any other race on the calendar. It's a harsh testing ground, where outright speed is truly challenged. And in 2017, with cornering speeds higher than ever, the Tifosi are in for a real treat.