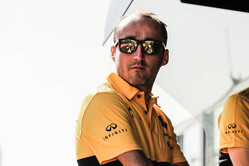 Despite the three-week break, a subject still fresh in the mind of fans and journos alike is that of Robert Kubica, and whether the popular Pole might make a fairy-tale return to the F1 grid several years after the rally crash that almost ended his life.

Positive outings in private tests in an old car, were followed by a positive performance in the 2017 Renault at the in-season test which followed the Hungarian Grand Prix, the Pole completing 142 laps and posting the fourth best time of the day.

However, speaking to reporters in Belgium, Cyril Abiteboul said that as positive as the test might have been, it was inconclusive and the team still needs more 'evidence' of Kubica's fitness and ability before a decision can be made on his future.

Asked what happen next in the process, the Frenchman told reporters: "Good question...

"We said we wanted to be extremely methodological and analytical about the way we were approaching things with Robert," he continued. "It's not a PR exercise, it's something that we are taking very seriously and leaving the emotion aside.

"We don't have all the answers that we potentially wanted to get from that test," he admitted. "In a perfect world we would want to do more of this type of test to see if he can race again at the level that he and we would have wanted. It may or may not be possible, we will see."

Pressed on what issues might prevent Kubica making his dream return, Abiteboul said: ”It's various things to do to be coming back into a racing car at this level... a car that is extremely different to the car he has been driving six or seven years ago, and the (2012) car he drove at a test in Le Castellet.

"So without going into too much detail, you can see what it could involve to go one step further," he added. "Testing in isolation, a private test with one car, in controlled elements without rain or first lap action that you can always encounter, all of that needs to be factored into the decision of pursuing or not pursuing.

"We would all like Robert to be back, but it has to make sense."

Of course, other than the post Abu Dhabi test, the other opportunity might be to run the Pole in one or two of the forthcoming Friday sessions, a move that Renault has – thus far – dismissed.