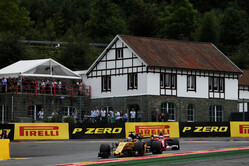 Renault Sport Formula One Team ended the first day of the Pirelli Belgian Grand Prix with Nico Hulkenberg leading the charge for the team with the seventh-fastest lap time, 1min 46.441secs. Jolyon Palmer posted the tenth-fastest time of the day, a 1min 46.670secs. Between them in FP2, Nico and Jo completed 47 laps of the 7.004 km Spa Francorchamps circuit, the most of any team. Today's session programmes ran without trouble, however rain interrupted the end of FP2.

In FP1, both drivers used Pirelli's Soft (yellow) and Ultrasoft (purple) tyres. In FP2, Jolyon and Nico ran with the Supersoft (red) and Ultrasoft tyres.

Nico Hulkenberg: "It got a little fruity out there at the end of the day with the rain, but we had a decent Friday and could show decent enough pace in the dry. It was the usual work on set-up and we made positive steps to get a positive balance and harmony around the track. It's going to be interesting to see what the weather does for the rest of the weekend as we didn't expect as much rain as we saw today; that's one of the delights of Spa."

Jolyon Palmer: "I love Spa as a circuit so it was great to be able to get some good work done on the car throughout today's sessions. By the end of FP1 the car felt pretty special. FP2 was interrupted by the rain, but we were able to get further understanding of the tyres before the heavens opened. It was a good start to my weekend so I'm hopeful it continues in a positive manner."

Nick Chester, Technical Director, Chassis: "It was good to get back in action after the summer shutdown and it was a positive Friday for us. We evaluated aero updates in the morning which performed as expected and will be retained for the rest of the weekend. Both drivers made strong progress on set-up over the course of the day, even if rain stopped play a little early. We've got a decent baseline with the car for the weekend ahead."