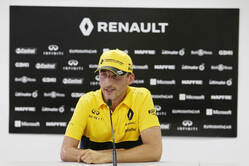 "I was very pleased with the test, I managed to get through not so physically tired. I feel like I could have done even more laps. It's obviously extremely tough driving the 2017 car, and there's no rest at a circuit like this... especially in 36 degree temperatures."

Not the words of 32-year-old Robert Kubica, in a contemporary F1 car for the first time in six years following an accident that almost cost him his life and from which he still suffers. No, these were the words of 19-year-old GP3 champion elect George Russell who drove the Mercedes over both days of the test.

In the full glare of the media spotlight, Kubica completed just over two race distances, and while there is a question mark over his times due to the lack of info on fuel loads, there is no doubting his stamina, self-belief and the sheer physical ability to drive these machines.

Speaking to reporters after the test, the Pole admitted he was not 100% happy, claiming that there are aspects that need improvement.

"I'm happy... but not 100 percent happy," said the Pole. "The biggest difference is this car has nothing similar or the same as the cars I have been testing lately and when you have so many things that are different, it normally takes a bit of time to adapt.

"You can predict it wasn't easy, which I'm not hiding, but it was good," he smiled. "I could drive, I think, tomorrow easily so fitness level is good, which is a good sign.

"There are sides which need to be improved or need to get better," he admitted, "but it's always like this."

Asked if he felt any pain or discomfort over the course of the day, he said: "From a physical point of view, inside the car it is much better than it looks outside the car. That's what's most important. I didn't have any pain, I actually feel quite well. Of course, I'm tired. It has been a hot day in the end the eight hours of running, I jumped out only once for ten minutes."

In terms of the machinery, the Pole said the biggest difference is the sheer weight of the car.

"When I last time drove the car, the minimum weight was 620kg, to have another 100kg bringing around the track makes a big difference.

In view of his injuries, Renault has obviously had to make some adjustments, but not too many.

"For the adaptation of the steering wheel, there was not one part that was done especially for me," he revealed. "There are some adaptations on the gearshift but it's something that's been used in the past, it's still been used lately with some other teams which I know, and I used it in the simulators. There is nothing that's been done strictly for myself.

"The steering wheel was adapted the past two days but it was just to reshuffle the button positions to allow me to operate the highest priorities easier and the lower-priority buttons, which you never use, in the positions that are more difficult to reach."

The question now is, what next?

Though Renault insists that Jolyon Palmer's seat is safe, Kubica is almost certain to make a couple of FP1 appearances in the coming races, though at this time the French outfit is saying nothing.

If nothing else, the French team, and the sport's owners, will be aware of what a massive publicity coup this fairy tale is turning into.

Check out our Wenesday gallery from Hungary, here.