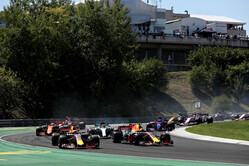 Franz Tost, boss of sister team Toro Rosso, summed it up perfectly just two weeks ago at Silverstone, when he said: "The worst scenario that can ever happen is the collision between teammates on the first lap of the race."

Two weeks later and that was exactly the scenario when Max Verstappen, still recovering from a botched move in Turn 1 on Bottas, clashed with teammate Daniel Ricciardo moments later in Turn 2, thereby ending the Australian's race.

"Someone hit me," said Ricciardo over the radio. "If it's who I think it was it's shit!"

The Australian went on to describe Verstappen's move as "amateur", claiming it was "a poor mistake" the result of "not liking it when a teammate overtakes him".

The Hungaroring stewards agreed, handing the teenager a 10s time penalty that effectively ended his hopes of a podium finish.

Keen not to let the situation escalate, especially within a team that places so much emphasis on the camaraderie between its drivers, Verstappen was quick to apologise at race end.

"It was of course not what you want," he admitted. "I think everything started in Turn 1, the start was actually quite good but I got squeezed wide by Bottas and lost quite a lot of speed.

"We were both fighting for position in Turn 2," he continued, "so we braked quite deep into the corner. I tried to keep it to the inside but then I just got locking... locking, and then I unfortunately touched Daniel on the weakest point of the car, in the side. I was trying to avoid Daniel but unfortunately that was not possible.

"It is never my intention to hit anyone," he added, "especially not your teammate, and especially with the relationship I have with Daniel, it's always really good and we can always have a laugh.

"It is not nice and I apologise to Daniel for that and also to the team because we could have scored some good points here. I'll speak with Daniel in private and we'll sort it out."

"Max made a mistake under braking, locked up and hit the side of Daniel’s car causing sufficient damage for him to have to retire on the spot," said Christian Horner. "Not only did it eradicate one car but it also landed Max with a 10 second penalty for the contact.

"It was particularly frustrating because it was clear we had a very competitive car despite the time penalty that he had to serve. His pace during the race was certainly capable of being on the podium today and gave nothing away to our competitors.

"It was pleasing to see him put his hand up and immediately apologise to Daniel and to the team and we all move on from that."