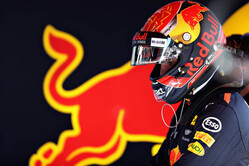 Max Verstappen: "I think the situation started from Turn 1. My start was actually quite good but then I got squeezed a bit wide on to the astro-turf and lost quite a bit of speed. Then Daniel and I were both fighting for position at Turn 2 so we braked quite deep into the corner. I had a car in front of me so I lost quite a bit of downforce and locked the front tyres, from there I was just a passenger. I was trying to avoid Daniel of course but unfortunately that was not possible. It is never my intention to hit anyone, but especially not your team-mate, and especially with the relationship I have with Daniel, it's always really good and we can always have a laugh. This is not nice and I apologise to Daniel for that and also to the team because we could have scored some good points here. I'll speak with Daniel in private and we'll sort it out. It was actually a positive Sunday in terms of pace. It's not nice what happened in the beginning of the race, so I'm of course not happy with that, but at least the car is moving forward."

Daniel Ricciardo: "The start wasn't too bad and I got a good exit out of Turn 1, I saw Bottas on the inside of Turn 2 so knew I had plenty of room on the outside. I thought it was a good place to position myself and protect my position through the turn. I felt a hit but couldn't see who it was, I knew Max was on my inside going into Turn 2 so assumed it must have been him. It's really frustrating as we know our car has been better than sixth all weekend so we went out there to push for a good result and get on the podium. We will discuss the incident in de-brief this evening and me and Max will talk privately also and sort it out. I would have loved to race today and now I have four weeks to wait until I can get in the car again. It's a shame to finish the first half of the season and head into the summer break in this way."

Christian Horner, Team Principal: "A very frustrating day for us. After both cars made good starts, Max ran wide at Turn 1 which allowed Daniel to get past on the run to Turn 2 and unfortunately Max made a mistake under braking, locked up and hit the side of Daniel's car causing sufficient damage for him to have to retire on the spot. Not only did it eradicate one car but it also landed Max with a 10 second penalty for the contact. It was particularly frustrating today because it was clear we had a very competitive race car despite the time penalty that he had to serve. His pace during the race was certainly capable of being on the podium today and gave nothing away to our competitors. It was pleasing to see Max put his hand up and immediately apologise to Daniel and to the team and we all move on from that."