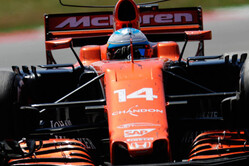 McLaren Honda ended second practice for the Hungarian Grand Prix in eighth (Fernando Alonso) and 10th (Stoffel Vandoorne) positions.
Despite each session being punctuated by several red-flag stoppages, the team evaluated a number of development parts during the day. We'll now evaluate the car's balance and set-up and make further improvements tonight ahead of qualifying tomorrow.

Fernando Alonso: "It was a good day; even though it's always difficult on a Friday to get a clear picture, we're more or less where we thought we would be. We did some good testing and now we need to analyse the data and see where we've made progress.

"We're a little bit more competitive here than we were in the last couple of races, and it feels better to be able to potentially fight for Q3 and for a top-10 finish. We are taking care of every single detail - the smallest things matter."

Stoffel Vandoorne: "With both cars in the top 10, today's been a fairly positive day for us - everything went as we expected. As usual, the times in the midfield are very tight, so it'll be very important to find those tiny steps for tomorrow to enable us to improve a little bit.

"At the end of the session, we had a problem with the MGU-H but it didn't really matter because the PU I was using was already at the end of its mileage and we were going to fit another engine anyway, so luckily we'll have no penalties.

"I feel comfortable in the car, even though it's still not 100% there yet, and I'm confident we can take a step forward tomorrow."

Eric Boullier: "It's pleasing to end the day with both cars having finished inside the top 10 in both sessions. Fernando and Stoffel showed excellent consistency to match each other lap after lap during two sessions where progress was difficult due to a frustrating number of red flags.

"Nonetheless, Stoffel was particularly impressive today, and his performances underline the steady progress he has been quietly making over the past few races. It was just a pity that his afternoon session was cut short by an MGU-H problem - it was an older unit, nearing its mileage limit, and wasn't due to be used for the remainder of the weekend anyway. It won't have any impact on the remainder of his weekend.

"We've made a positive start to this grand prix, but we're mindful that there's still a lot of work left to do if we're to extract the maximum out of our car's package this weekend."

Yusuke Hasegawa: "We came to the Hungaroring with expectations of acquiring some points here, and it has been a positive start for us today.

"Fernando was running with some new aero parts trying various settings in order to find the best balance of the car. Stoffel ran well, with lap-times close to his team-mate. We had to stop his car towards the end of FP2 due to an MGU-H issue, however the PU was nearing its life-span and the plan was to change it after FP2 so it will not affect the remainder of his weekend.

"In addition, we are not expecting to receive any penalties with this PU replacement which will take place tonight.

"We are expecting another tough session in hot conditions tomorrow; however, we think we have enough potential for both drivers to go through into Q3 here in Hungary."