Horner: F1 has some serious questions to answer 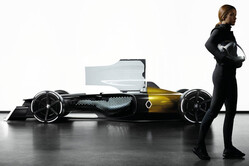 When the controversial Strategy Group meets tomorrow, much of the talk will be of F1 matters concerning the immediate future of the sport, such as the Shield, F1 weekend timetables, tyre compounds and even last weeks' event in London.

However, Christian Horner, believes that with the engine rules for 2021 and beyond up for discussion, the sport must begin looking even further ahead.

"Formula One is effectively at a crossroads with the new regulations," he said, "because those regulations theoretically come in 2021 and there will be probably an eight to ten-year life on those engines, so what we are looking at is actually is Formula One's relevance pretty much up to 2030.

"So Formula One has some serious questions that it needs to answer today in the choice it makes for the engine for the future.

"What is Formula One's primary purpose? Is it technology or is it a sport and entertainment, and man and machine at the absolute limit?

"I sense that with the new ownership that has come into Formula One that creating great entertainment, creating great content, the noise, the sound, the exhilaration of seeing the drivers as the star is of absolute primary concern to them.

"So I hope that with the opportunity there is with the regulation change that is being discussed at the moment that the fundamental aspects of cost, performance and attractiveness to the fans, therefore the noise, the acoustics of these engines, are a key factor in the set of regulations they come up with and I think that in turn will produce good racing, reduce costs and bring back some to the appeal that engines of a bygone era used to produce."