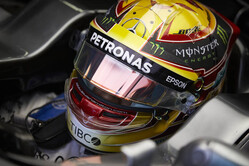 Ahead of today's sole practice session, the air temperature is 15 degrees C, while the track temperature is 20 degrees. It is somewhat nippy and overcast with just a hint of rain in the air. Indeed, the risk of rain stands, officially, at 80%.

Valtteri Bottas topped the timesheets in both of yesterday's sessions, but was subsequently hit with as 5-place grid penalty after Mercedes elected to change his gearbox having encountered similar damage to that of Lewis Hamilton post-Baku.

Then, this morning it was confirmed that Red Bull has changed the gearbox on Daniel Ricciardo's car thereby handing the Australian a similar penalty and no doubt causing teammate Max Verstappen some concern, the youngster having failed to finish 5 of the last 7 races.

All of which is good news for Lewis Hamilton, who, like Bottas appeared formidable yesterday.

Ferrari turned up the wick in FP2, but was still somewhat off the pace, though we are hoping the Italian team, which has a significant upgrade here, might show its hand over the next hour, especially in the Q3 sims.

On the other hand, Mercedes also has an engine upgrade, so, providing the weather gods don't interfere, we could see a real head-to-head later in the hour.

Behind the three leading teams yesterday, it was a real mish-mash, with Hulkenberg, ahead of Massa, Alonso, Ocon and the Toro Rossos. Needless to say, the McLaren driver will start from the back of the grid - possibly the old grid - after picking up numerous engine penalties.

Wehrlein is first out, followed by Ricciardo, Magnussen, Ericsson, Palmer and Vandoorne.

With an eye on the weather, Hamilton is among the early risers, and in no time at all is atop the timesheets with a 29.544, the Briton already well and truly on the pace.

Raikkonen (supers) goes third with a 29.897, the Finn subsequently reporting that "it's starting to rain".

After 13 minutes of running, only 12 drivers have posted times... though all but Vettel, Magnussen and Massa are on track.

As Verstappen re-takes fifth, Ocon goes seventh (30.355) ahead of Sainz and Perez.

"I'm not going to push anymore, because I don't trust the car," admits Kvyat.

As Massa becomes the last driver to post a time (31.976), Ocon improves to seventh with a 30.172. Force India could be the real beneficiaries from the penalties meted out to Bottas and Ricciardo.

Mistakes by Stroll and Grosjean sees both drivers run wide in T15.

Bottas heads out on the supers, followed by teammate Hamilton. The German could be bringing its Q3 sim runs forward with an eye on the weather.

As the begin their flying laps, Raikkonen reports that it's "raining quite heavy in Turn 3".

Nonetheless, Hamilton goes quickest in S1, maintaining pace in S2. At the line he posts 28.063, leaving Bottas 0.764s in his wake.

Raikkonen can only manage 28.977, almost a second off Hamilton's best.

Next time around Bottas improves to 28.137 but remains third, while countryman Raikkonen posts 28.732.

From out of nowhere, Hulkenberg produces a 29.480 to go fifth, behind the Ferraris and ahead of the Red Bulls. Teammate Palmer is currently 18th.

"I'm getting some vibration from the engine," warns Palmer. "Fourth gear, high revs."

"Box this lap, I have bad shifts," warns Vandoorne, the Belgian is indeed told to pit immediately.

Up go the umbrellas, on go the anoraks... all that's missing is the rooster tails.

That bloody orange lion is in the crowd again... either there's a whole team of them or the guy inside is very wealthy.

Told to find a gap and start a lap, Verstappen responds "forget it, it's raining". He is subsequently warned of yellow flags in T7, "I know," says the youngster, who has gone off, "it's because of me!"

With 14:40 remaining there is nobody on track.

As the clock continues counting down the teams face a conundrum, do they try another run or, with qualifying just two hours away, do they stay put.

Vandoorne, who probably has little to lose, heads out on Inters.

No sooner has Vandoorne said that everything is fine than he has a major wobble just before heading back into the pits.

With 6:40 remaining, Hamilton climbs into his car, having made a number of Larry David type adjustments to his overalls. Think about it.

While Hamilton remains in his car, it is Verstappen who heads out. He is subsequently joined by Kvyat.

With less than 3 minutes remaining, a number of drivers head out, including the Mercedes duo. The Ferrari pair stay put.

A number of sectors are officially declared "slippery", as Ricciardo confirms after losing as he exits the final corner and almost hitting the wall.

As the clock hits 0.50 the Ferrari head out, purely to perform a practice start, just in case.

A big spin at T17 for Ericsson.

All 20 drivers are on track as the session ends, the drivers all very wary of the conditions.

Strange that there wasn't more running, as there is likely to be more rain before - if not during qualifying - and there is no warmth to dry the track.

Even Hamilton has an minor off, proving that it can - and will - happen to anyone.

With the top three covered by just 0.074 we expecting a thrilling shoot-out in Q3, the battle for pole might now become just as exciting, albeit for different reasons.