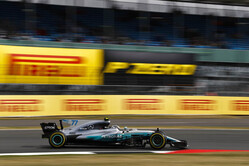 The first day of Silverstone with the 2017 generation of cars, featuring extra downforce and wider tyres, resulted in performance never seen before at the current Silverstone circuit, with cars, drivers and tyres subjected to maximum lateral loads of more than 5g and speeds well over 280kph through Copse Corner.

The teams selected a number of quite different tyre choices heading into this event, so the programme today - assessing wear and degradation on each compound with differing fuel loads - was vital in working out which tyres they wanted to give back, as per the current regulations, and which to keep for qualifying and the race.

Conditions remained cool and overcast, with ambient temperatures never exceeding 18 degrees centigrade and asphalt in the region of 24 degrees centigrade. Weather of this type is expected to remain for the rest of the weekend, with rain possible as well.

Mario Isola: "Although the teams chose some quite different allocations of tyres before the race, as they all discard certain sets in accordance with the regulations, it's likely that they will end up with selections that are quite similar for qualifying and the race. One thing we have definitely seen already is that the speeds and therefore loads on the tyres are unprecedented this year. This is exactly as we would expect from all the high-energy tracks this season, because of the increased downforce and wider tyres. Despite these extra demands, the supersoft made its very first grand prix weekend appearance at Silverstone and set the record-breaking time with Bottas. So far, this compound is around 0.7 seconds per lap faster than the soft. If the weather remains dry tomorrow - which is definitely a question mark - we can expect the benchmark to be lowered even futher in qualifying."