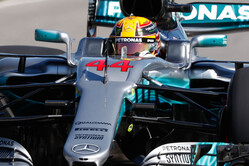 There are two reserve drivers on duty this morning, Alfonso Celis at Force India and Sergey Sirotkin at Renault, they replace Sergio Perez and Nico Hulkenberg respectively.

Following a successful trial in the Friday sessions in Baku, both McLaren drivers have access to the upgraded 'spec 3' Honda this weekend.

Sin minutes in and all bar Alonso and Bottas have made an appearance, while Verstappen is the first driver to post a time, the Red Bull driver stopping the clock at 1:09.173.

This being a 'real' race circuit, certainly compared to Baku, the teams are running various updates, some more than others. Williams particularly appears to have been busy over the break.

With Bottas still to appear, when Verstappen heads back to the pits there are several minutes of inactivity. Eventually Stroll's Mercedes engine fills the hills with the sound of F1 'music'.

The Canadian posts the second time of the day, crossing the line at 10.971. Subsequently improving to 9.658, the Canadian pushed his luck in the ever-inviting final corners. HE subsequently reports that his "rears are starting to go".

Ocon posts 14.735 to go third, but is immediately leapfrogged by Grosjean and Vandoorne.

A real mix of tyres, Verstappen having posted his best on softs, while other drivers are on the super and ultras.

As Hamilton goes second (8.836) and Bottas finally heads out, Raikkonen spins at T1 though it is not clear why, early suggestions claim brake-by-wire.

"My tyres are gone," reports the Finn.

Bottas wastes no time in getting up to speed, the Finn going quickest (7.591) on his first flying lap, as Ocon goes third with an 8.692.

Hamilton responds with a 7.469 as Vettel has his own spin at T1 bringing out the double yellows.

"No damage, just a spin, I lost the back, nothing to worry about," says the German.

As Stroll spins at T9, Bottas posts 6.845 to go top. Replay shows that (again) Stroll lost the back end. He subsequently reports a "lot of vibration". "Might be a flat-spot," he adds, "I hit the kerb pretty hard".

As Bottas runs wide in T1, Verstappen follows his example, the Dutchman clearly distracted by the Finn.

Shortly after the Dutchman goes off again, this time at T7. Telling his team he "clipped the wall", he is told to pit. He obeys, and the cameras pick up on his rear tyre which has had the Pirelli logos removes by said wall.

Replay shows the Red Bull actually went off at T7 and clouted the barrier.

Palmer and Sainz both run wide in T9.

Meanwhile, Vettel goes second (6.826) to Hamilton who had just posted 6.526, around 0.3s off last year's pole time. The Briton is on the ultrasofts however, while Vettel is on supers.

Quickest on the softs is fourth placed Verstappen

A 7.837 sees Vandoorne go seventh, the Belgian clearly benefitting from the Honda upgrade.

At 40 minutes, when the extra set of tyres have to be returned, Hamilton is quickest, ahead of Vettel, Bottas, Verstappen, Kvyat, Ricciardo, Vandoorne, Massa, Raikkonen and Ocon.

Indeed, following his earlier spin, Raikkonen is the only driver on track.

The Ferrari driver continues to enjoy having the track to himself for lap after lap, working his way up to fourth (7.321), before finally being told to "box".

Once again, silence fills the hills.

After around ten minutes of nothing - bar The Kimster - engines fire up and Palmer and Stroll head out to entertain the crowds.

Here we go, we knew it was too good to be true... "We've got too much understeer," complains Grosjean.

Meanwhile, Bottas retakes the top spot with a 6.345 while Ricciardo improves to fourth with a 7.203.

As Sainz spins in T1, he is followed by Stroll and then Wehrlein... thereby keeping the yellow flag waving.

As Grosjean heads back to the pits with a puncture, Kvyat spins at T4 and heads off into the kitty litter. Talking of which, we need to order some.

Replay shows Grosjean running wide in Turns 9 and 10 at the time of his puncture.

Hamilton improves to 6.449 but remains second to his Mercedes teammate. Talking of whom, there's a spin for Bottas in T1.

Both McLaren drivers in the top ten, Vandoorne fifth and Alonso ninth, though both are on the ultras.

Only ten corners - and it used to be nine - but they are all causing problems.

A 6.329 sees Hamilton take the top spot, the Briton - on softs - subsequently improving to a blistering 5.975.

On a run of 5 laps, Raikkonen is given a whole list of instructions including not using DRS for one lap as the team checks something to do with the floor on his car.

As attention now focusses on long runs on the ultras and supers, Ocon reports a vibration. Hamilton is the only driver on softs.

Verstappen (supers) improves to third with a 6.406 as Massa runs wide in T9 and Hamilton in T1. The Brazilian subsequently reports that he wants to pit as he hit the kerb.

Another improvement (6.276) sees Verstappen split the Mercedes, albeit 0.301s off Hamilton's pace.

Another off for Sainz (T10). "Traffic with Max," he claims, suggesting it was the wake from the Red Bull which caused him to go lose traction and run wide.

Shortly after, Verstappen has his own issue, spinning T3 and taking a real pounding as he skates over the kerbs. Just prior to his off, the Red Bull driver had gone quickest in S1.