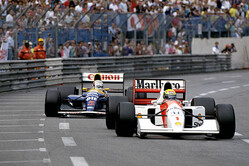 The Romanian-born COO at Force India was previously vice-president of Honda's F1 team, and therefore well placed to comment on its current issues.

He believes that the Japanese company's time away from the sport is having a major impact on its progress - or lack of it - citing the fact that previous incarnations of the Honda programme have been able to benefit from the experience of previous generations of engineers.

"What I found was that the guys who had worked in the third generation project who had come from the second generation had very good knowledge of F1 and what it takes," he said, according to Motorsport.com. "They were able to put the programme together in order to compete at the highest level.

"I remember when Takeo Kiuchi, who was Senna and Prost's race engineer came in, within two or three years we had the lightest and most powerful V10 engine," he continued. "He knew what it took it and he did it. We ended up with 968bhp and 88kg, which was just a little bit lighter than the BMW and a little bit more powerful. They did that.

"What they are lacking this time around is that experience of what it takes," he added. Hasegawa was there previously, but he was a controls engineer, and I am not sure they have the strength in depth of experienced F1 engineers working on the project. Back then they had loads of them and they knew what it took. If you don't have that at the beginning, it takes time to get that.

"But they are on their way of getting that experience of what it takes, and it would be a shame for them to part company with McLaren as opposed to sticking it out and making it good."

He also played down claims that the company's insistence on operating out of Japan is an issue.

"It wasn't a problem before, all we did in the UK was assemble the engines," he said. "All the design, development and manufacturer happened in Japan and it didn't have an impact.

"You need to understand the task and how difficult it is," he continued. "The other thing with Honda is that they got a late start. All the other engine manufacturers, when they started talking about the new regulations, the first thing they did was start on a single cylinder engine programme knowing it would be a turbo charged V6. So to catch all that up is hard, and it doesn't happen overnight.