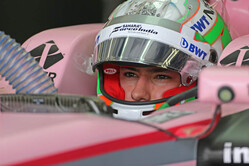 Force India has confirmed that Mexico's Alfonso Celis Jr will drive the opening Friday sessions in both Austria and Hungary.

At the Red Bull Ring the youngster will driver Perez' car while at the Hungaroring it is Esteban Ocon who will make way.

The Red Bull Ring outing will mark the 20-year-old's first F1 outing since the Bahrain test.

Celis is currently 3rd in the World Series Formula V8 3.5 championship, having converted pole at Spa-Francorchamps into his first win on the year.

Last weekend's round at Aragon in Spain marked the second occasion this year the Fortec driver has scored podium finishes in both races.