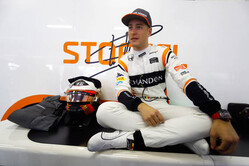 Fernando Alonso and Stoffel Vandoorne are both set to take 15-place grid penalties this weekend.

Plagued by MGU-H issues in recent races, Honda admitting that the units could barely survive two races, both drivers will have the benefit of revised units for this weekend's Azerbaijan Grand Prix.

However, the revised MGU-Hs mean that both drivers will need to take on new turbochargers and since both are already on the 5th versions of each, both will incur 15-place grid penalties.

While Alonso will also run a new Internal Combustion Engine, it is his fourth and therefore does not incur a penalty.

Honda is to test a number of new components tomorrow (Friday) before deciding whether to run them for the remainder of the Baku weekend.

News of the penalties was first revealed by Vandoorne who told reporters: "We already have some penalties to start the weekend, which is not ideal but this is the situation we are in.

"We will try and make our best focus maybe a bit more on race runs," he added, "and hopefully we can play a little bit during the race. We are probably competing to start from the back of the grid."

Asked if the new components from Honda are expected to deliver a performance boost, the youngster replied: "It's probably more of a question for Honda.

"I don't think there's many new introductions this weekend," he admitted, "so it will not be too different. To be honest it's not up to me to take such a decision.

"It's been a difficult start to the season," he added, "it's definitely not an ideal situation for everyone. We'd like to be fighting much higher up on the grid, but we are trying to put McLaren's interest at the top and that's what is the most important for us now.

"We need to fight back and I am pretty sure the team is moving in the right direction, and hopefully at some point we will be competitive again, and hopefully that is sooner rather than later."