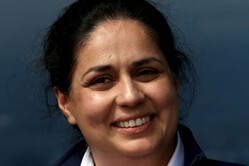 Though the Swiss team has yet to confirm it, numerous sources claim that Monisha Kaltenborn has left Sauber.

Kaltenborn, who prior to joining Sauber as head of its legal department in 2000, was with the Fritz Kaiser Group which handled the corporate affairs of the (then) Red Bull sponsored outfit.

Appointed to the Board of Management at Sauber in 2001, she became CEO in 2010 and having received a third of the company's stakeholding in 2011 subsequently took over from founder Peter Sauber as Team Principal in 2012.

One of the very first women to enjoy a high-profile role in the F1 paddock, it is understood that Kaltenborn's role with the team became untenable following a row with Longbow Finance who bought the Hinwil-based outfit last year.

It is believed the row centred on the direction the Swiss team is to take having agreed to a Honda engine supply from 2018.

Among the issues on which the parties disagreed, it is believed that while Longbow is keen to see Marcus Ericsson continue in a senior role with the team, Kaltenborn disagreed and wanted more prominence given to Pascal Wehrlein.

Ironically, it is the German who scored the Swiss outfit's points which moved it ahead of McLaren in the standings.