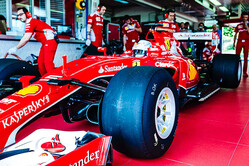 Pirelli's Paul Hembery has dismissed claims that part of the reason for Ferrari's remarkable revival this year is due to its attitude to tyre testing last year.

Along with Mercedes and Red Bull, Ferrari took part in a number of tests at which 2017 compounds and constructions were run, albeit with a mule car intended to simulate the kind of downforce to be expected under the new regulations.

While Ferrari ran both its race drivers, Sebastian Vettel and Kimi Raikkonen, Mercedes opted to use Pascal Wehrlein, Toto Wolff admitting that the move was because Lewis Hamilton and Nico Rosberg were battling for the (2016) title.

However, Paul Hembery has poured cold water on the suggestion that Ferrari or Vettel benefitted, insisting the only advantage the German might have enjoyed was psychological.

“Yes, Sebastian did a lot of testing,” Hembery told the official F1 website. “It was very intense and he gave us a lot of feedback. That is what we wanted, the top drivers giving us good feedback.

“But because he didn’t really know what he was testing - he was blind-testing - it might have helped him psychologically, but I doubt it helped practically.”

Referring to Mercedes issues, he said: "Actually Mercedes’ issue is linked a bit to certain circuits: in Barcelona they were fine, and in Silverstone and Spa they will be as well.

"It’s the lower-grip circuits where they’ve had a few more problems, but I am sure they will resolve any issues as we go through the season."