Renault: No major upgrade this year 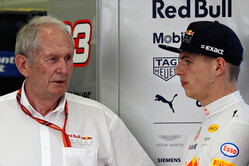 The chorus of frustration at Red Bull and Toro Rosso is likely to get a lot louder in the weeks and months ahead, as Renault boss Cyril Abiteboul pours cold water on hopes of a major upgrade for the forthcoming race in Baku or any time soon.

Indeed, while the French manufacturer will continue to improve its power units throughout the season, it has no plans for a significant upgrade until next season.

"It was Red Bull who said that there would be an upgrade in Baku," he told the official F1 website. "There are upgrades permanently, every single race we are making some small improvements.

"Last year we created a huge expectation and we came with an upgrade that had a big impact," he continued. "But we can't repeat that every year.

"Now it is all about constant improvements which overall will make a difference," he insisted, "but there is no magic bullet. Every race the engine will become more and more reliable with the program on the dyno progressing.

"Frankly the next big upgrade will be next year. Then we will have a completely new concept. That will make a difference, but as I said 2018."

The season had barely begun when Red Bull's Helmut Marko warned that unless an alternative, independent, cheap, noisy, race-winning engine could be found, the Austrian company might have to reconsider its future in the sport, a view since echoed by Dietrich Mateschitz, Christian Horner and Franz Tost.

Indeed, following Daniil Kvyat's pre-race issues in Canada, Tost showed levels of exasperation and frustration normally reserved for Eric Boullier, though in all honesty the Frenchman has just cause to feel aggrieved.

"Daniil's engine stalled at the start of the formation lap," said Tost, "we need to investigate how this happened, because there's no excuse; an engine should never stall and there must be a technical solution to avoid this from happening."