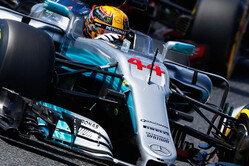 Ahead of today's opening session the air temperature is 20 degrees C, while the track temperature is 25 degrees. It is somewhat overcast but no sign of the predicted heavy rain, far less thunderstorms. Indeed, Race Control predicts only a 10% chance of the wet stuff.

This track is notorious for testing brakes to the very limit, so expect some colourful comments from Grosjean over the next few days, while Mercedes is expected to continue suffering its tyre warming issues.

Having not been put to any serious use since last year, the track is understandably green and dusty.

Lots of new rear wings on show as the teams prepare for the high speed and downforce demands of this track.

Just four minutes into the session, Sainz pulls to the side of the track at T1 with what appears to be an engine issue. He climbs from the Toro Rosso having confirmed that it was an engine failure.

All but the Mercedes duo have been out, using a mixture of all three compounds.

Grosjean is already complaining but it's not about the brakes, rather a Sauber driver.

With ll but the Mercedes duo having appeared, 10 minutes into the session silence descends on the Island.

After several minutes of nothing, Vandoorne heads out to entertain the crowd. Sort of.

No sooner has Raikkonen joined Vandoorne on track than the Finn loses the back and spins in T7, carrying out a nice donut in his efforts to get the Ferrari pointing the right way.

On the ultras, Raikkonen goes quickest with a 16.846 as Verstappen posts 20.679 and Bottas finally heads out, on the supers.

Twenty-three minutes in and Hamilton finally heads out.

A spin for Vettel now, the German losing the back of the car in T2... seagull country.

Hulkenberg misses the apex at T14, the notorious final chicane.

Vettel demotes Hamilton with a 15.172 but the Ferraris are on the softest compound unlike the Mercedes duo.

Thirty minutes in and all bar Sainz and the McLaren duo have posted times.

Palmer is suffering electrical issues in his Renault.

Hulkenberg does a Raikkonen by spinning in T7.

A 15.039 sees Bottas leapfrog the Ferraris as Hulkenberg is told to "cool the car".

Now Hamilton goes quickest, the Briton stopping the clock at 15.003. The top three are covered by just 0.086s.

Massa goes fifth (16.001), ahead of Ricciardo, Grosjean, Ocon and Verstappen.

We've had groundhogs, we've had seagulls, this time around it's a squirrel that captures the attention of the TV cameras, taking full advantage of the lull in the action.

After several minutes of inactivity Bottas gets things underway, the Finn subsequently joined by Vandoorne, both are on ultrasofts.

On the purple-banded rubber Bottas immediately goes quickest with a 14.374. Hamilton, also on track on the ultras, is apprised of his teammate's progress.

Vandoorne posts a 16.434 to go 8th, but still no sign of Alonso posting a time any time soon though he has completed a handful of laps.

Having improved to 15.943, Vandoorne misses the final chicane... he isn't the first and he won't be the last.

A 13.961 sees Hamilton go quickest as teammate Bottas carries just a little too much speed as he enters the pitlane and is forced to lock-up.

"I don't have any stability mid-corner," says Stroll who is currently 14th, a second off his teammate's pace.

Another improvement from Vettel but at 14.007 he remains tantalisingly close to the 1:13s barrier. Elsewhere, Raikkonen posts 14.293 to re-take fourth.

Hamilton improves to 13.809 as the Red Bull and Williams duos continue on supersofts.

Oh dear, no sooner has Alonso posted 16.521 to go 13th than he stops on track. The Spaniard climbs wearily from his car, having thrown cockpit protection surround back into the MCL32 and waves to the crowd.

Reporting the steering felt "super heavy" and the gearbox moving into neutral, the Spaniard is told to stop the car immediately.

A big squeal of tyres as Verstappen gets the final chicane totally wrong. For a brief moment it appears he might head into the pitlane before he opts to continue.

While Verstappen is currently seventh, Ricciardo is down in fourteenth, the Australian having only completed 19 laps.

On-board coverage from Hamilton's car shows a groundhog running across the track.

Ocon spins at T6, thereby bringing out the yellow flags. Like the various other spins we've seen this morning, it's a case of the rear stepping out and the driver being unable to catch it.

As Ricciardo improves to ninth (15.441), Hamilton has to take avoiding action when Ericsson locks-up.

As the chequered flag is waved, Stroll remains very unhappy with the stability of the Williams. "It's just so bad," he complains.

Kvyat complains about the antics of a driver he refers to as "that guy", the driver in question being Vettel. They have history remember.