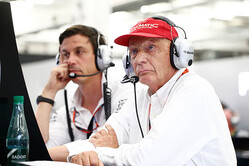 Though Austrian, Niki Lauda admits he would enjoy some good old-fashioned schaudenfraude should Sebastian Vettel suffer a couple of DNFs in the remaining races.

The three-time world champion admits that in the wake of the Monaco Grand Prix, Mercedes only hopes of winning both the drivers' and constructors' titles lays depends largely on Ferrari reliability.

Monaco highlighted an issue with the W08 whereby it struggles with the ultrasofts on circuits the feature low speed corners and a low abrasive track surface.

Indeed, with an eye on the issues that Lewis Hamilton suffered in Monaco, particularly in qualifying, the German team fears similar issues in the forthcoming races in Canada and Azerbaijan which both feature similar corners and the purple-banded tyres.

"We need to find a solution for the tyre window," Lauda told Austria's Kronen Zeitung.

"One thing is clear," he added, "Vettel needs to retire at least once, otherwise it's over.

"Ferrari has got a momentum going,” he admitted. If it stays like this the gap will become huge... it's alarming."

While the German outfit seeks to get to the root of its tyre issue and resolve it, the situation further complicated by the fact that all four corners of the car appear to be working independently making the job of getting the optimum operating temperature exactly right, Ferrari appears to have no such issues.

Like Mercedes, Ferrari has suffered just one retirement this year, ironically Valtteri Bottas suffering an engine failure in Spain having played a significant part in the first corner incident that eliminated Kimi Raikkonen.

However, in terms of ICE and components use, with Vettel on his fourth Turbocharger and third MGU-H, the question of grid penalties is sure to arise in the not too distant future.

Thus far Vettel has finishes either first or second in every race.