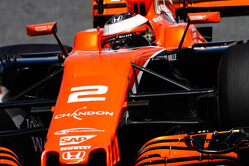 It was a productive day of first running for McLaren Honda in Monte-Carlo today. Stoffel ended this afternoon's session in 11th position, pleased with the direction and momentum of the package beneath him.

Stoff is joined in the garage this weekend by Jenson Button, subbing for Fernando Alonso, who is racing in Sunday's Indy 500 in the USA.

Jenson spent the morning session bedding himself in and evaluating the grip and grunt of the MCL32, before starting to more fully explore the limits in this afternoon's session as the grip on-track increased.

He ended the session 12th, just a few hundredths' shy of Stoffel. However, both drivers are still confident there is more to come.

Stoffel Vandoorne: "It's been a reasonably good day's running. If you look at today's lap-times, you can see how extremely tight it is in the midfield - and that's exactly where we are. That means we really need to maximise every single opportunity that comes our way this weekend so we can eke out every last bit of performance from the car. An extra tenth or two could make a huge difference in Saturday's qualifying.

"I'm feeling pretty comfortable in the car. I think we'll make some small adjustments ahead of FP3, and those should hopefully help us take another slight step forward. The most important thing around here is to build up throughout the weekend, and to be fully prepared for qualifying.
"I think we can be in good shape for that. There's still more to come from us this weekend."

Jenson Button: "It was funny when I did the install lap this morning, I had a little giggle to myself. Have I missed it? No, but when you jump in the car, you definitely enjoy the moments that you have. I've really enjoyed practice, both the long and short runs. FP2 was a bit of a struggle to really find my feet with the car. I'm braking so much later than what I'm used to here and carrying so much speed into the corners. Adjusting to that takes time, so with another day with the engineers and a look through the data, I'm confident that I can improve for Saturday.

"As soon as I exited the pits, everything felt very natural. The weirdest thing is when you're behind a car or when you let a car past, because you look at it and it's gigantic. Then you feel really uncomfortable because you think, maybe I am too close to the barriers. But the car fits well; it fits like a glove.

"I haven't really thought about where I hope to finish. It's a very mixed-up grid at the moment which I'm sure will all change again on Saturday. I don't expect to be one tenth off the Mercedes cars in qualifying, but the guys understand where I'm coming from. They know what they need to do to improve the car to suit me a little bit more and to give me a little bit more confidence.

"Hopefully we'll see a step in performance on Saturday."

Eric Boullier: "It's always fantastic to be in Monte-Carlo for the Monaco Grand Prix, particularly after a relatively quick and trouble-free day of running. We managed to execute our run-programme with very few disruptions today, and, while that's nothing to be proud of, it's satisfying to have been able to maintain momentum with both cars through both sessions.

"I'm pleased that Stoffel had such a productive day. Both he and his engineers have worked hard since the last race to better understand how he and the car can work together, and I think we're starting to see the fruits of those labours.

"Jenson also had a good day. He judged the day very well, typically playing himself in gently during FP1 before starting to explore the increased grip and performance of these 2017 cars in the afternoon. After FP2, he admitted that he'd had a lot of fun in the car today, and I think that translated directly into his lap-times.

"This has been a solid start to our weekend. We'll now spend Friday evaluating the data and will look to further improve on Saturday."

Satoshi Nakamura: "It was a good start for us here in Monte-Carlo today. Stoffel and Jenson each clocked more than 70 laps without any major issues throughout FP1 and FP2, and we were able to go through our programmes with minimal disruption.

"For Jenson, today was his first time behind the wheel of a Formula 1 car since his swan-song in Abu Dhabi last year. The cars have changed a huge amount since then, but Jenson showed today what an incredibly capable and experienced driver he is and was quickly up to speed. I'm looking forward to seeing how he progresses over the remainder of the weekend.

"It was also Stoffel's first time around Monaco in a Formula 1 car, although he is of course a former winner here in GP2. It was great for him to have such a solid day of running. He's been working incredibly hard with the team over the last few weeks and we are seeing encouraging results from that hard work this weekend.

"Needless to say, qualifying will be key here as overtaking is very difficult. Although we will not have any sessions tomorrow, we will continue to work hard analysing the data collected today to gain as much lap-time as possible before Saturday."