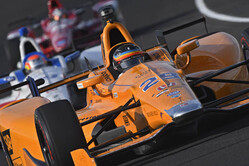 "We tested a couple of different trims and different setup options," said Alonso, whose best lap was a 225.619 mph. "The car felt quite OK from the very beginning of the morning, but then I think we did improve it during the day, so I'm quite happy.

"We worked still a lot on the race situation, keeping other guys out there and running in traffic. I think we found a good balance for traffic. I think tomorrow we will concentrate a little bit more alone on qualifying, but the priority is the race."

The lone incident of the day came early, when Josef Newgarden spun exiting Turn 1 and hit the barrier. Though uninjured, his car was done for the day but he still wound up fifth on the speed chart at 225.455 mph.

With today (Friday's) action likely to be compromised by rain a number of drivers got in some early qualifying simulations.

Providing the rain does hold off, speeds are expected to increase today ahead of the weekend's qualifying runs, as Indycar regulations allow for turbocharger boost to increase on Friday, equating to about 30 additional horsepower permitted through the completion of qualifying.