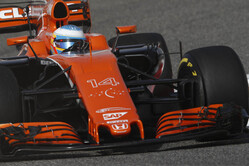 Fernando Alonso grabbed his car by the scruff of its neck in both Q1 and Q2 of the Russian Grand Prix, eventually ending up 15th quickest after describing his quickest lap of the afternoon as 'nearly perfect'.

Stoffel Vandoorne set the 17th-fastest time in Q1, but will start tomorrow's race from the back of the grid after incurring a 15-place grid penalty for exceeding the maximum number of annually permitted power unit components during yesterday's free practice session. He will start 20th tomorrow.

Fernando Alonso: "It was a good qualifying in terms of the performance of the chassis and aerodynamics – the balance of the car felt quite good; quite grippy in the corners. I felt competitive, and my Q1 lap was very good.

"The tyres are tricky around here, as you need to warm them up quite hard, but everything went okay today. The sunny weather helped – and I think it's going to be a good tyre for the race.

"Points tomorrow are our target, we need to have a good start, a good strategy, and a good race. Even then, we won't be fast enough to get into in the points so we'll need some help from the guys ahead of us."

Stoffel Vandoorne: "After receiving the grid penalty yesterday for changing power unit components, we chose to direct our focus more towards tomorrow's race.

"We knew we'd more or less be starting from the back, so our main aim will be to try and get the most out of tomorrow's race. Although we know it's going to be difficult for us to overtake around here, I still think that a lot of things can happen over a race distance. Even if it turns out to be a one-stop race, it'll be a long afternoon – and, hopefully, there'll be some incidents or a Safety Car, which could create some scenarios that might play into our hands.

"We expected to have another difficult weekend, but I'm hoping for a better day and the opportunity to make something happen in the race."

Eric Boullier: "We knew even before the start of qualifying that this would be a tricky session for us. Stoffel's 15-place grid penalty, which was received yesterday for fitting the fifth MGU-K and turbo of the season, meant he was always likely to be starting from the back, and that's unfortunately the case for tomorrow.

"It'll be a tough afternoon for him, but he's resolved to fight hard – it's good to see such fighting spirit given the somewhat trying circumstances.

"Fernando drove with all his typical vigour this afternoon, leaving absolutely nothing on the track when he set his fastest time of the day, in Q1. He looked utterly magnificent out on-track, and we can only hope that we're able to provide him with a package better suited to his mighty talents sooner rather than later.

"We approach tomorrow's race looking to make the most of each and every opportunity that may come our way. Rest assured, we've lost none of our fight."

Yusuke Hasegawa: "We expected this circuit to be challenging for our package, and, unfortunately, today's result reflects this.

"During FP3 this morning we were concentrating most of our time on finding the best balance for the car. Both drivers tried various ride-heights and mechanical balances in order to find the best setting for qualifying at this circuit. As this circuit is quite tricky for tyre management, we also focused on the usage of each type of tyre in order to warm them up efficiently.

"During qualifying today, Fernando showed his excellent performance once again by reaching Q2 in tough circumstances. Stoffel also showed a brilliant performance keeping his motivation high despite having a 15-place penalty for the race.

"Tomorrow's race will be hard, but everyone in the team will fight hard to get the best we can out of our package and push for points."