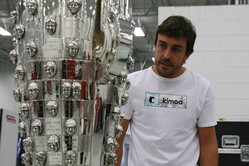 Ahead of his much anticipated Indy 500 debut, Fernando Alonso spent the weekend watching IndyCar in Alabama.

The Spaniard, who this weekend contests the Russian Grand Prix before heading to Indianapolis next Wednesday for his initial test ahead of the 28 May event, attended the Honda Indy Grand Prix of Alabama over the weekend as a spectator.

As one would expect, the two-time world champion was the centre of attention, with the media and Indy 500 rivals all keen to hear the Spaniard's thoughts.

Alonso, who was accompanied by McLaren boss Zak Brown, played down speculation over how he will fare in the event, insisting that this is part of a longer-term scenario.

"Let's take it day by day and see on May 29th what is the situation," he told reporters, "how much I enjoyed the experience, how competitive I felt, and if I had fun, which is the priority for me.

"I do this because I love racing cars," he insisted, "I love driving the fastest cars, and the Indy 500 is the biggest race in the world so it's very attractive to race it, enjoy it and to feel that unique experience. Everyone is telling me it will be a very unique atmosphere and a very intense day.

"After that, whatever the result we will achieve, we will think together what is the future from that point." 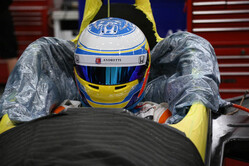 The Spaniard is said to be targeting motor sport's Triple Crown, which consists of winning the Le Mans 24-Hour race, the Monaco Grand Prix and the Indy 500.

While a couple of drivers have achieved two of the feats, Jacques Villeneuve and Mario Andretti close to three, only one man has thus far achieved all three, Graham Hill.

When announcing his intention to contest the Indy 500, and admitting his Triple Crown ambition, Alonso couldn't name the only other driver to have achieved the feat, surely a thought that would be foremost in your mind, driving you on.

Interestingly, Alonso sees Indy as a bigger challenge than the French classic.

"The biggest task is definitely the Indy 500 for a Formula One driver," he said. "I think it's quite different, it's challenging... the level of downforce, the feeling with the car, running with a car that is not symmetric on the straights, on braking. Traffic I think is a big thing. 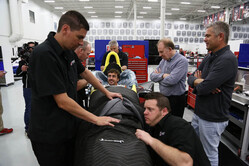 "Some of the F1 drivers that jump into the Le Mans car, they have no difficulties in terms of adapting," he continued. "The 24 Hours is a little different, it's a more relaxed race, you can do it at an older age."

Admitting that whatever happens on May 28, McLaren will consider a longer term involvement in IndyCar, Zak Brown admitted it was still too early to contemplate a return to Le Mans.

"Our automotive group will make the decision," he told Reuters. "Mike Flewitt, the CEO of McLaren Automotive Limited, will make the ultimate decision, but nothing has been discussed. I think Le Mans is a massive race like the Indy."