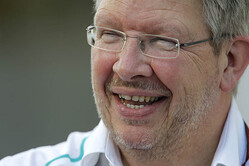 Ross Brawn has admitted that in his role as technical boss at FOM he would not have been able to work alongside Bernie Ecclestone, but has denied that side-lining the former F1 supremo was a deal breaker.

When Liberty Media bought F1 in January, the first move was to side-line the sport's former supremo, Bernie Ecclestone, and install a new team comprising Chase Carey, effectively as the new supremo, alongside Sean Bratches, who would be responsible for the commercial aspects of the sport, and Ross Brawn, who would head up the technical side.

Brawn, who won titles with Benetton, Ferrari and then his own team, before selling it to Mercedes, has made no secret that he would not have accepted a senior role - nor probably been offered it - under the old regime, admitting that he would have found it difficult to work with Ecclestone.

The veteran technical boss has now elaborated on why he couldn't work with Ecclestone, but strongly denies that side-lining the Briton was a deal breaker.

Asked if a condition of him accepting the role was that Ecclestone be sidelined, Brawn tells F1 Racing: "That is not true. I mean, I couldn't work with Bernie, but I never made that a condition."

"It would have been very entertaining to work with Bernie," he continues. "But it wasn't impossible, Bernie has done things in his own way over the years, and very effectively.

"But I've never seen Bernie with any serious partners, certainly not in terms of running the business," he adds. "He's had people who've helped him with aspects of the business, but I'm not sure that my philosophy of how I think it could go forward necessarily aligns with Bernie's.

"Bernie was very adept to a reactive approach," claims Brawn, "mine is the opposite, I want to have a planned and a long-term approach. I think Bernie famously said 'Don't plan long-term because you don't know what's going to be there when you get there.'"

Brawn insists that while FOM has its own ideas for the direction the sport should be heading, he concedes that ultimately it is the FIA which will remain responsible for the rules of the sport.

"We're going to fight our corner, if anything more strongly in the future than perhaps has been done," he says. "But that's not to say that previous management were not interested in that, but it was a bit staccato. They came in when there was a crisis, whereas we want to be part of a continuous process to try and improve.

Speaking in Bahrain last weekend, Bernie Ecclestone's first visit to an F1 race this year, the former supremo was up to his usual mischief, making comments that worked on various levels.

Revealing that he has had little contact with the FOM team, he claimed not to have met Bratches, while meeting Brawn "for ten minutes a week or so ago".