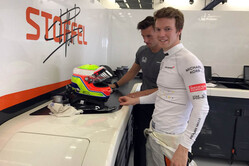 When Honda tweeted "Good morning from Bahrain International Circuit. And welcome to Oliver Turvey. It's test time", alongside a picture of the grinning Briton, you just knew it was going to end in tears.

Tempted to tweet our feelings, that the youngster wouldn't be grinning for much longer, we opted not to bother. An opportunity was missed.

Several hours into the session, and with the youngster having completed just two installation laps, it was clear that Honda had suffered yet another failure.

Following the weekend's numerous MGU-H failures, which resulted in Stoffel Vandoorne not even starting the Grand Prix, Turvey has been sidelined by a water leak in the Energy Recovery System, resulting in yet another engine change.

As investigations into the MGU-H issue continue, it is understood - but not confirmed - that today's issue is with a new spec of engine, Honda having made clear that it intends using this week's two day test to improve both performance and reliability.

Indeed, it is understood Yusuke Hasegawa has returned to Japan to oversee the Bahrain post-mortem.

Check out our Tuesday gallery from Bahrain, here.