From bad to worse for McLaren 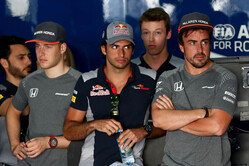 It was a comment that most of us can empathise with, those four or five little words that sum up the feeling of utter despondency when you have given up, aware that you are banging your head against a wall.

Having already lost hard-won positions to drivers he shouldn't have been mixing it with in the first place, Fernando Alonso vented his increasing frustration at a power unit that is not only woefully unreliable but equally woefully lacking in grunt.

"How they can overtake me? 300 metres behind me, and they overtake me on the straight," he sighed, "I've never raced with less power in my life.

"**** he was, what, 300 metres behind us on the straight?" he snapped as another backmarker roared past.

"Fernando, we are considering Plan B, how are the tyres?" came the call from his engineer....

And then came those oh so familiar words... "do whatever you want… man."

In the weeks ahead the Spaniard faces a schedule that few of us would envy, as he mingles his F1 efforts along with his preparations for his much-publicised Indy 500 debut.

Deckchairs aside, long-haul flights, days in the Indy simulator, visits to Alabama and back-to-back sessions switching from one discipline to the other are the places Fernando would rather be, anywhere but that wretched McLaren-Honda.

As the team continues to bask in the glory of the PR stunt that is Alonso doing anything else other than poodling around Monaco in an unreliable, underpowered car, the fact is that after Indy it will be a case of 'welcome back to the nightmare".

On a day Stoffel Vandoorne took to Twitter to ask "going for a run, you guys up to anything this Sunday?" - his race over before it had begun, the Belgian sidelined by his third failure of the weekend, Honda could only admit that it remains mystified and perplexed by the ongoing issues.

But as those of us who look forward to Christmas and Easter can confirm, as much as we anticipate those few days away from the grindstone, soon it is all over and we're back on the treadmill.

With no end to Honda's issues in sight, Zak Brown would do well to seek out other events for Fernando and Stoffel to attend.

There's still the possibility of Le Mans in June, while Wimbledon would make a good alternative for the Austrian and British rounds or how about the US Open in preference to the Belgian and Italian rounds.