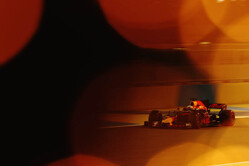 Daniel Ricciardo: "It's been a good and positive day today. We didn't expect much to change from China to here but now we're a lot closer to pole than we were a week ago so we'll take that. To be on the second row and to get ahead of a Ferrari is a good surprise. We kind of thought if we put everything together then there might be a chance of a second row and we got it. We're learning and are getting a bit more out of the car as well which is great to see. If tomorrow Mercedes and Ferrari run into some tyre degradation maybe we can have a bit of a go. But the aim now is to try and maintain this gap in the race and stay within half a second or second each lap and to replicate our pace during qualifying in the long runs."

Max Verstappen: "In general the whole qualifying was very positive and we improved with every session up until the last run where I just got hurt in the preparation. Felipe (Massa) squeezed in front and I had to stay in first gear to keep a gap to him so the tyres cooled down which hurt my first sector. If you lose straight away two tenths then it's not ideal and you try to catch up but it's very hard if the tyres are not in the window. The pace was there today but just not on the last run when it counted, but sometimes that happens if you have some traffic. We have made many small improvements and tried to optimise everything which seemed to work and we understand the car more and more with every run that we do. We are definitely closer, I think Mercedes is still too fast for us but the Ferrari doesn't look too far ahead. Our car seems to work much better on this track so hopefully we will get a clean start with no incidents and then see what we can do in the race. It was definitely possible to be a bit further forward but last time I started a bit further behind and ended on the podium so anything is possible."

Christian Horner, Team Principal: "In a qualifying session that was always going to get faster and faster, Daniel did an excellent job in extracting every ounce of performance there was in the car, and to have picked off one of the Ferraris and got on to the second row is the absolute maximum we could have hoped for here. Max made great progress through the sessions, unfortunately on his final lap he didn't have the best preparation that he would have liked, having a little bit of traffic on his out lap. Nevertheless he lines up on the third row of the grid and can still have a strong race from there. The gap to the leaders has consistently come down through the first three events of the season and to have got on to the second row is a positive step forward for the team."