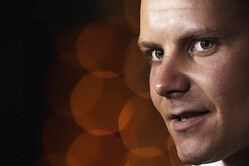 Ahead of today's qualifying session the air temperature is 30 degrees C, while the track temperature is 0 degrees - according to officials. As the sun sets so the temperature goes down also, especially that of the track surface, which explains why many believe that FP1 and FP3 are pretty much redundant here.

While Max Verstappen topped the timesheets earlier, it would be a shock to see the Red Bull claim pole position.

While the temperatures will have eased over the break, the blustery winds that were causing all manner of handling issues haven't. Indeed, they are expected to increase tomorrow for the race.

Based on the evidence thus far, it's a close call between Mercedes and Ferrari, though perhaps we shouldn't rule out Red Bull just yet.

Sebastian Vettel has topped the timesheets in two of the three sessions, while FP3 witnessed Lewis Hamilton's best result of the weekend, the Briton finishing second.

The Briton has had a frustrating weekend, traffic spoiling his flying laps on Friday and the red flag that followed Romain Grosjean's crash in FP3 once again costing him.

At the same time, following his "stupid mistake" in China, Valtteri Bottas is looking to make amends, whilst Kimi Raikkonen is 'on notice' as far as Sergio Marchionne is concerned.

Nico Hulkenberg has put in some impressive laps this weekend, further muddying the waters as far as the highly ultra-competitive midfield is concerned, and how about Pascal Wehrlein putting his Sauber 13th on the sheets earlier.

Other than discarding T-wings, it's been a trouble-free weekend thus far for Mercedes, while Ferrari and Red Bull have encountered issues at one stage or another.

However, their problems pale into insignificance compared to that of Romain Grosjean who has suffered everything bar a plague of locusts.

Wehrlein gets proceedings underway, followed by Ericsson and Stroll.

More and more drivers head out, leaving just Vettel and countryman Hulkenberg in the pits.

As was the case yesterday, Hamilton, having gone quickest in S1, opts to abort the lap. However, it's not due to traffic this time, rather the fact that he ran wide in T10.

Ocon complains that his DRS is not working as Verstappen goes quickest with 30.904.

Clearly unperturbed by his earlier off, Hamilton posts 30.814 to go quickest.

As Massa goes fifth, Alonso goes tenth only to be demoted by his own teammate who posts 32.558.

With 6 minutes remaining, Stroll, Magnussen, Ericsson, Ocon and Grosjean comprise the drop zone. Indeed, Grosjean has yet to post a time.

As in FP3, an impressive performance from Wehrlein, who has put his Sauber 11th.

As Grosjean begins his final attempt, the Haas fuelled for two laps, Raikkonen heads out also.

Only four drivers, Hamilton, Vettel, Raikkonen and Bottas posted their times on softs, the rest were on Supers.

Grosjean goes eighth with a 31.691, which should be enough to get him through.

Raikkonen posts a PB in S1 as Vandoorne complains that his brakes are poor. In S2 Raikkonen goes quickest, the Finn crossing the line at 30.988 to go third despite losing time behind Perez in the final sector, and despite losing his monkey seat as he ran wide behind the Force India.

Now Sainz goes quickest in S1 as the chequered flag is waved.

Sainz has pulled to the side of the track. "No power, no power," he sighs.

As the lights go green for Q2, Sainz arrives back in the paddock.

Soon 13 of the 15 drivers are on track, all sporting supersofts.

Hamilton is advised that these are the tyres he will start the race on.

Bottas is quickest in both the first sectors, crossing the line at 29.555, fastest lap of the weekend thus far.

Raikkonen goes fourth with a 29.843, the Finn having been advised that one rear tyre was much (ten degrees) warmer than the other.

Massa goes seventh with a 30.677, ahead of Kvyat, Hulkenberg and Palmer.

With 6 minutes remaining, Alonso and Stroll have yet to post a time.

There follows a couple of minutes of inactivity. In the McLaren garage Alonso is out of his car, his session over.

Grosjean and Stroll head out, Palmer following shortly after.

With less than three minutes remaining, Grosjean, Ocon, Wehrlein, Stroll and Alonso comprise the drop zone. All but the Spaniard are on track, along with Kvyat, Hulkenberg and Palmer.

Palmer improves to ninth with a 30.899, thereby demoting his Renault teammate.

Kvyat fails to improve while Hulkenberg bangs in a 30.169 to go fifth, great stuff from the German.

His mood clearly improved from FP3, Grosjean sings Happy Birthday to himself as he heads back to the garage.

Green light, Q3 gets underway, and the Red Bull duo can't wait to get out there, Ricciardo leading the way.

Next out are the Mercedes pair, followed by Massa and then the Ferraris.

Hulkenberg, Grosjean and Palmer appear to be opting for a single lap run at the end.

As the main players head back to the pits, Raikkonen still "struggling like crazy with the understeer", Grosjean heads out.

As Grosjean begins his flying lap, Hulkenberg and Palmer join him on track.

The Red Bulls follow, and then Bottas followed by Hamilton.

As Bottas begins his flying lap, Hamilton looks as though he is about to improve in S1.

Bottas goes quickest with a 28.769 as Hamilton fails to improve having made a mistake in S2. Moments later however, Ricciardo goes fourth with a 29.545.

Vettel and Raikkonen both fail to improve meaning that three races into his Mercedes career, Bottas is on pole.

"A bit of a messy lap," apologises Vettel, "I tried a bit too much."

Very, very impressive from Bottas and Mercedes, while, on the face of it, disappointing from Ferrari. Then again, bearing in mind Raikkonen's long run pace on Friday is the Italian team playing the long game?