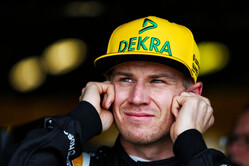 Just over half-an-hour into FP2, Hamilton had to take avoiding action and run wide after coming up behind the slow Renault of Hulkenberg who was on the racing line.

"These drivers are just so dangerous man," said the Briton over the team radio, having had to abort two previous flying laps due to traffic.

It was subsequently announced that the Stewards were investigating the incident, believing Hulkenberg's impeding of Hamilton constituted dangerous driving, a breach of Articles 27.4 & 31.6 of the Sporting Regulations.

Having spoken to the Renault and Mercedes drivers and studied the video evidence the Stewards deemed that the Briton was on a fast lap while the German was on a slow lap and aware of the approaching car.

"Hulkenberg moved to left as he approached the corner," they said, "but due to the differing lines taken by the drivers they arrived at the same point on the track.

Taking the points made by the drivers into consideration and previous incidents of this type the Stewards decided that no further action was necessary.