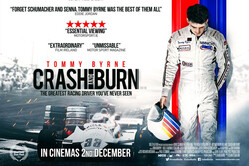 Note that I wrote, 'The BBC has screened' because the documentary is an independent Irish film. It has been well received and, for an Irish story, it has the right mix of sentimentality, a sense of betrayal, and sheer blarney.

The outline is that Tommy Byrne was potentially a great racing driver who started with next to nothing and who, on merit alone, made his way to a Formula One seat. Even though it was with a back-marker team. Byrne did splendidly. He then had a test with McLaren and elements within the team screwed him. He was a genius behind the wheel, better than Ayrton Senna, but he was screwed by his humble beginnings.

According to the film the elite of motor racing had no time for him. I am not sure who the 'elite' might be, but it is noticeable that the word is increasingly used by those who support populist politics and conspiracy theories.

I saw many of Tommy's early races and reported on some for Autosport and Motoring News. I was also present for part of the session in which Byrne went remarkably well. The film suggests that Tommy was unfairly treated by McLaren, but this is not the case.

For a start, it was not a McLaren test. The session was arranged by Marlboro, which sponsored both McLaren and the British Formula Three Championship. The top three finishers in the F3 series received a run in a McLaren. There was no question of the team auditioning drivers, McLaren was contracted to fulfil Marlboro's wishes.

The following year Ayrton Senna and Martin Brundle had runs in a McLaren. A few weeks later they were back at Silverstone to test for, respectively, Toleman and Tyrrell. I asked Martin about the McLaren session he said that it was useful preparation and he had gone to the gym to work on the parts of his body which had ached.

That illustrates the Marlboro sessions perfectly. They attracted drivers to the series and gave them an experience for their CV. In passing, the film mentions McLaren's contractual obligation, but it does not elaborate. It is easy to assume that Byrne was auditioning for a drive.

This has led to Ron Dennis being cast in a poor light, regarding Byrne. In fact, McLaren fulfilled its role with the level of professionalism with which Ron Dennis became synonymous.

Tommy was born on the wrong side of the track and was a bit of a tearaway on a motorbike. A pal suggested that he bought laps at a racing school at Mondello Park and Tommy was hooked. His mother obtained a bank loan under false pretences and bought him a used Crossle‚ FF1600. He came to England and spent two seasons crashing. Exactly how he could afford to do this is not adequately explained in the film.

Eventually he came good and in 1980 was offered a works drive with Van Diemen. There were six FF1600 championships in Britain at the time (not counting pre-74 and those for novices) and Tommy won two of the three most prestigious. He was beaten by Roberto Moreno in the third. For the record, Kenny Acheson won all three in 1978.

In 1981 Tommy moved to FF2000 and won both the European and the British series. In 1980 there had been two British FF2000 series, both won by Richard Trott, though Martin Brundle was fifth in one. Trott was the star, Brundle a make-weight. You can never tell how good a driver will be in Formula One until he is in Formula One.

Byrne's career paralleled that of Ayrton Senna, one year in arrears. Tommy maintains that he was better than Senna, but they never actually raced against each other. Given the audacity of the boast, this important fact is not raised in the film.

At the end of 1981, Senna had announced his retirement and returned to Brazil. Ralph Firman, owner of Van Diemen, called on Tommy to drive in the Formula Ford Festival, and Tommy won it. Founded in 1972, the Festival once had huge prestige, though that has been in decline of late. Of the winners, 15 have gone on to drive in F1 and four have won Grands Prix. Put it another way, most winners did not progress far. The only driver to win two Festivals was Donald McLeod.

Murray Taylor gave Byrne a free drive in Formula Three in 1982 and he hammered the opposition, he was a very quick driver over a short distance. Murray, a Kiwi and former journalist, was making his way and he needed wins to attract pay drivers. The team lurched along on prize money and what Tommy could bring from friends.

Tommy was a party animal and London was where the best parties were. He shagged, he boozed, smoked weed, sniffed nasal highballs and mingled with suspect company. Criminals like to hang around sportsmen and Tommy was good company. He never did much in the way of honest work to advance his career.

When fellow Irishmen, Derek Daly and David Kennedy, were strapped for cash, they went to Australia and worked in an opal mine for six months. There has been many a party animal in motor racing, but most have been sensible enough to also pay attention to their careers. Byrne thought it enough to turn up at a circuit and be quick, essentially, he was a weekend racer. He also appears to have believed that he was so special that the world owed him a living. He was a prick.

Then came a call from the Theodore F1 team. 1982 was the year that the turbo cars came good and there were 19 teams fighting for 24 starts. Theodore was the hobby of Teddy Yip, an Indonesian who had made his fortune developing property in Hong Kong and who then headed a consortium which was granted a monopoly to develop Macau as a tourist centre.

Teddy had once been an amateur racer and, from 1974, teamed up with Irishman, Sid Taylor, a respected team manager. Teddy founded the Macau GP and turned it into the prestige event it is today. As an entrant, Teddy's cars won a record number of Macau events.

The Theodore F1 team was run from Teddy's pocket. It employed first rate people like Tony Southgate, the designer, and Jo Ramirez, the team manager, but funds were not unlimited. The team got Teddy into the game, but he had no long-term ambitions. Still, he gave drives to such as Keke Rosberg, Derek Daly, Eddie Cheever, Patrick Tambay and Marc Surer.

The thrust of 'Crash and Burn' is that Tommy Byrne was shunned by the motor racing 'elite', even though he had obtained free drives in FF1600, FF2000, F3 and F1.

On two occasions, Tommy put the Theodore TY02 on the grid. Both times, in the race, he made a mistake and spun out at roughly half distance. This relevant information is missing from the film, but it may suggest that Tommy was not physically fit enough to drive a Grand Prix distance.

Tommy fell out with the team, it came to blows, as he fell out with so many people who did not worship his talent. His GP record is two starts and two spins.

He returned to British F3 and secured the title at the last race, and that was a remarkable result.

Then came the Marlboro session where he lapped quicker than a McLaren had ever lapped Silverstone. He concluded his drive with three laps at 1m 10.1s. That was 0.9s under pole time at the 1981 British GP (Silverstone and Brands Hatch alternated) and then Rene Arnoux's Renault had been on qualifying tyre and using qualifying turbo boost.

There is no question, but that it was a remarkable feat. Ron Dennis, who was not at the session, was reported as saying that he did not care how quick Tommy was, he was not getting a drive with McLaren. This was noted in the racing press and helped to foster the idea that drivers were auditioning.

Tommy had a remarkable feat on his CV and most drivers would have translated it into interest from other teams. Memory in motor racing is short and F1 has accommodated many a cocky youngster and party animal.

For 1983 Tommy secured an F3 drive in a works Anson (designed by Irishman, Gary Anderson.) There was the occasion when Tommy missed a qualifying session because he was in his hotel shagging/sniffing Colombian marching powder, possibly both. Gary Anderson had offered Byrne a lifeline and he blew it.

Tommy went to the States and performed well in ARS, the feeder formula to Indycar. He never drove in Champcar because no premier team owner wanted him. He ended his racing career in Mexico driving for characters who could provide hookers and stimulants.

The past quarter of a century Tommy has become a respected performance driving coach.

'Crash and Burn' it is an Irish film about a poor lad who was rejected by the 'elite', yet he was given free drives in FF1600, FF2000, F3 and F1, and who blew his chances because he did not possess the intelligence or character to succeed. Being quick is only part of being a racing driver.

All good drivers are very intelligent, though only a couple of Grand Prix winners have been graduates. Tommy was quick, very quick, but he was not intelligent. There was no shortage of people giving him advice - Eddie Jordan was one - but he would not listen.

The film tries to make out that Byrne was a sublime talent, screwed by a mysterious 'elite', but the fact is that Tommy needed no assistance when it came to screwing his life.