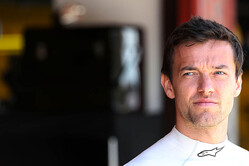 Having spoken to both drivers and studied the appropriate video and telemetry evidence, Race Stewards in Shanghai deemed that both Grosjean and Palmer failed to slow for the double waved yellow flags at the end of Q1.

Both drivers were on hot laps in an attempt to escape the drop zone and make it through to Q2 in the final moments of the session when Antonio Giovinazzi lost control of his Sauber and crashed just ahead.

In both cases the Stewards ruled that the drivers attempted to set a meaningful lap time after passing through a double waved yellow marshalling sector, in breach of Article 12.1.1 i.

The Stewards also took into consideration that the drivers made no attempt to significantly reduce their speed in the area of a double waved yellow flag in breach of Appendix H, Article 2.4.5.1 b).

Both drivers were reminded that, in accordance with Article 12.2.4 of the FIA International Sporting Code and Article 38.3 g) of the FIA Formula One Sporting regulations, the penalty is not susceptible to appeal.