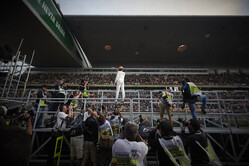 Ahead of today's qualifying session, the air temperature is 21 degrees C, while the track temperature is 32 degrees. As was the case in FP1 it is bright, we won't go so far as saying sunny because that never really happens here.

Furthermore, we won't go so far as saying "all important qualifying session", because no matter what happens over the next hour, tomorrow is going to another kettle of fish entirely. By that we mean that tomorrow is expected to see similar conditions to those which severely compromised Friday's sessions.

Thankfully an alternative has been found to the helicopter issue which caused all the problems, which thereby begs the question as to why this couldn't have been arrange in advance. That was, other than losing track time we wouldn't have had the kneejerk reactions from some on Planet Paddock - yes, we mean you too Lewis - in terms of how race weekend should be run from now on.

As a result of yesterday's issues, this morning's session was the first real insight into what we might expect this afternoon, and it's bad news for Mercedes and Red Bull.

Despite his mistake in T14 it is unlikely that Lewis Hamilton would have toppled Sebastian Vettel, and even then was the Briton's mistake the result of overdriving the car in an attempt to close the gap.

As a result, both Mercedes are over 0.37s off the pace, with the Ferraris separated by just 0.05s.

Red Bull's issues appear to be about more than Renault power. The Milton Keynes drivers were not only sandwiched by the Williams duo, Jolyon Palmer was only marginally off the times set by Verstappen and Ricciardo.

While the disappointing performance from McLaren was to be expected, the equally poor performances from Haas and Force India was not.

On the other hand, aware of tomorrow's weather are some teams focussing on tomorrow as opposed to this afternoon.

As Hulkenberg and Magnussen join in the fun, Giovinazzi posts the first time of the session, the Italian stopping the clock at 1:35.437. Teammate Ericsson can only manage 35.869.

Indeed, Stroll isn't that much quicker, the Williams driver posting 35.136.

Vettel, Raikkonen, Hamilton and Bottas head out, the Ferraris on softs while the Mercedes duo are on supers.

As Bottas goes second (33.727), Hamilton could have gone quicker but lost time due to a yellow flag after Grosjean spun.

Indeed, the Frenchman did well to keep it out of the wall, though he picks up a puncture in the process.

"There's something not right with the engine," complains Verstappen, who aborts his lap and heads to the pits.

"Not much to improve," says Alonso, "I pushed like an animal."

With less than 5 minutes remaining, Verstappen heads out on a fresh set of supers. Vandoorne is seeking to improve on 15th.

The drop zone currently consists of Stroll, Ocon, Palmer, Grosjean and Verstappen, the latter two yet to post a time.

Next time around he posts PBs in the first two sectors, as Stroll goes fifth with a 33.986.

Verstappen can only manage 17th (35.433) the teenager given a list of instructions as to what modes to use. He replies that he has the same problem as earlier.

With seconds remaining, Grosjean and Verstappen post PBs in S1, and again in S2.

As the chequered flag is waved, off goes Giovinazzi as he exits the final corner. He hits the wall, bringing out the yellow flags that wrecks the laps of both Grosjean and Verstappen.

Replay shows the Sauber driver losing the back of the car as he runs wide in the final corner. Ironically, he makes it through to Q2 though his car is wrecked.

As the marshals clear the damaged Sauber from the track, the start of Q2 is delayed.

As it is revealed that there will be a further (5 minute) delay, the stewards confirm they are investigating Grosjean and Palmer for failing to slow down for the yellow flags that followed Giovinazzi's crash.

As Stroll heads out to get Q2 underway, Pirelli admits: "Pace and strategy of Ferrari impressive in Q1: fastest using just one set of soft tyres". Indeed.

Vettel and Raikkonen are out early, as are the Mercedes duo, everyone on the red-banded supers.

The Brazilian posts 33.759 to go sixth, just behind the lone Red Bull.

Sainz posts 34.150 to join his Toro Rosso teammate in the leading ten.

With 5:33 remaining, Alonso, Hulkenberg, Magnussen as Ericsson comprise the drop zone... along with Giovinazzi.

While the leading five appear to have settled for their times, the remaining nine head out, among them the Williams duo. Interestingly, the Ferraris also head out... still on their supers.

Hulkenberg improves to sixth with a 33.636, while Stroll makes it to Q2 by the skin of his teeth, thereby demoting Sainz to the drop zone. The Spaniard and countryman Alonso both fail to improve.

The lights go green and Hulkenberg gets proceedings underway. He is followed by Hamilton and Kvyat.

Soon all but Perez and Stroll are on track, all bar Kvyat on new supers. The Russian is on a used set.

As Hulkenberg posts 33.580, Hamilton is pushing his car to the limit, and it shows.

A 33.261 sees Ricciardo go second, as all eyes turn to Raikkonen and Vettel.

"Very bad grip at the rear," complains Raikkonen. "Are the settings the same," he asks.

Hulkenberg is out of his car and helmet off, which suggests he may have settled for sixth.

Perez heads out to get the final charge underway, the Mexican, like Stroll, still to post a time. Hamilton also heads out.

As is often the case, Vettel is last out. Countryman Hulkenberg is not going out.

PBs in S1 from Ricciardo and Hamilton, the Briton going purple in S2. Vettel also quick in S1.

Though Raikkonen can only manage 32.140, Vettel bangs in a 31.864 to join Hamilton on the front row, eclipsing Bottas by one-thousandth of a second.

The top four are covered by 0.462, with Ricciardo almost a second behind Raikkonen.

Hulkenberg, who didn't go out for a final run, only lost one position and will start seventh.

Hamilton will therefore start from pole, the Briton just two shy of his hero Ayrton Senna's all-time record of 65. He is joined on the front row by Vettel, who starts ahead of Bottas, Raikkonen, Ricciardo, Massa, Hulkenberg, Perez, Kvyat and Stroll.

However, with a 90% chance of rain tomorrow, all bets are pretty much off.